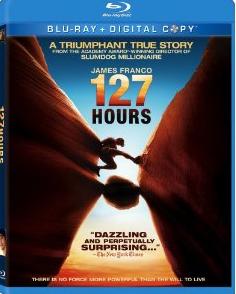 The true story behind 127 Hours seemed the ultimate challenge for Oscar-winning director Danny Boyle. How do you make a movie featuring one character pinned beneath a boulder in a Utah crevasse?

Boyle expands the real-life saga of adventure seeker Aron Ralston (James Franco) by focusing on videos shot during his imprisonment as well as flashbacks to the life he left behind.

The rest is up to Franco, and the accomplished actor faithfully duplicates Ralston's heroic actions and agonizing crash course in surgery.

Aron's zest for life catches up with him when he slips and falls while scurrying over rocks in a beautiful Utah canyon. A boulder follows him down, pinning his right arm to the canyon wall. With no one within ear shot and only modest supplies, Aron must find a way to survive long enough to fashion his own rescue.

Boyle's imaginative use of color and sound help break up the monotony of the canyon setting. A simple gulp of water becomes a crash of sights and sounds, amplifying Aron's experience in a way few other directors could mimic.

The Blu-ray extras include a commentary track with Boyle, producer Christian Colson and co-writer Simon Beaufoy, plus "Search & Rescue," a look at Ralston's remarkable rescue and "127 Hours: An Extraordinary View" detailing Boyle and Franco's teaming on the project.

The deleted scenes included here are all worthwhile, and the alternate ending might be the longest in home video history. But Boyle intuitively understood the need to keep 127 Hours as lean as possible. And moviegoers can breathe a sigh of relief that one scene in particular got the ax—a precursor to the excruciating surgery sequence.

"With the knives I have ... there's no way to get through the bone, it's too blunt," Ralston says.

It seems like ages since audiences watched Dwayne Johnson do what he does best—flex those balloon biceps and beat down the bad guys.

The erstwhile "Tooth Fairy" puts his game face back on in Faster, a rough and tumble revenge film with a touch of soul. Johnson plays the nameless Driver, a man bent on revenge after a long stint behind bars.

His past is a mystery but his present course of action catches the attention of a cop on the cusp of retirement (Billy Bob Thornton) and a younger, less burned out associate (Carla Gugino).

What begins as a boilerplate action vehicle takes a complicated turn mid-film. Seems some of the men targeted by the Driver have seen the error of their ways, forcing the vigilante to reconsider his bloodletting.

Thornton is terrific in a clichéd part, and the tension between him and Gugino adds nuance to an often one-dimensional story. But a subplot involving a British assassin (Oliver Jackson-Cohen) consistently undermines the narrative.

The Blu-ray extras include an alternate ending introduced by director George Tillman, Jr., deleted scenes and "Weapons and Wheels: The Guns, Cars and Stunts of "Faster" which breaks down the movie's mayhem.

The film isn't overstuffed with gags or pop culture references, and its animation doesn't strain for the hyper realism we see in today's CG-driven features.

This 1942 gem concentrates on a simply story, the journey of a young deer into adulthood, and tells it in a timeless fashion.

Children may grow restless at first given the relaxed pace, but Bambi's tale should win over young and old with its understated artistry and attention to the details that matter. The Disney animators turn Bambi's forest home into a richly illustrated expanse, using pastel-like textures to make it lush and inviting.

Yes, the death of Bambi's mother—hardly a spoiler after generations of movie watching—remains a tissue-clutching moment tastefully told. But it's the smaller moments that matter here - like Thumper advising Bambi that the water's "stiff" and Bambi's flirtations with a lovely doe.

The home video package offers a wealth of treats for "Bambi"-philes, including two never before seen deleted scenes, extras imported from previous DVD reissues and a deleted song, "Twitterpated." The juiciest morsel here is an interactive feature with voice actors reading actual transcripts from the Disney story meetings which helped bring "Bambi" to life.