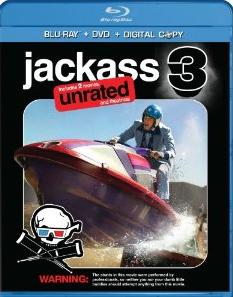 Johnny Knoxville celebrates his 40th birthday this week with another round of testicle bashing, head crushing mayhem.

Jackass 3 rejoins Knoxville with his MTV brethren—including Steve O, Bam Margera and Jason "Wee Man" Acuna—for a third round of "so painful it hurts to watch" stunts. Jackass fans know the drill, and the latest chapter in the popular film series doesn't deviate from the formula. It's amazing the cast survived the blunt force traumas orchestrated for our amusement.

The latest prank fest involves a fecal matter volcano, slow-motion shots of faces being hit by a variety of objects and being deposited in a pit full of both rubber and very real snakes. All the while, Knoxville and co. laugh maniacally. If only we were laughing so hard.

The sketches vary in length and some are downright clever, like a "prison escape" where the boys snake through a corridor lined with tasers and a cattle prod. Others, like an enormous hand which swings smack dab into unsuspecting "Jackass" personnel, is utterly bereft of entertainment value.

You're either already sold on the concept or eager to watch a test pattern rather than spend time with these overgrown adolescents. The Jackass squad continues to display almost no comedic talent in the traditional sense. There's no physical flair, no way with words—nothing that would indicate something clever is afoot.

Jackass 3 mixes in some comic pranks in between the physical challenges, but the gang never deliver the kind of yuks "Candid Camera" earned during its broadcast run.

The Blu-ray version comes fully loaded with more than just 11 deleted scenes, a digital copy and an unrated version of the surprise box office hit. Viewers also get the film in 3D as it was shown in theaters (along with four sets of glasses) as well as an MTV making-of special on the Jackass experience.

Four Lions deserves kudos for its daring premise alone. It's a black as night comedy mocking terrorists attempting to do damage to their British neighborhood. It's tricky material to be sure, but satirist Chris Morris delicately handles material that would have been wince inducing in less capable hands.

The film follows a quintet of wannabe suicide bombers planning their first and last strike. But being a terrorist isn't easy. First, you have to choose your target for maximum cultural impact. And, as the British lads here find out, managing bomb-making materials can be hazardous to one‘s health.

Four Lions spins off a simple but bold premise. You have to be some kind of a dolt to sign up for suicide bomber duty, and for a while the film maximizes the humor in that premise.

"We got people playing stringed instruments ... it's the end of days," one "Lion" wails. Later, another blames "Jewish spark plugs" when the gang's car stalls for the umpteenth time.

The film walks an unsteady line as it humanizes the suicide bombers while, later, mocking the security officials trying to prevent them from completing their mission. But the big laughs never arrive, and the film grows more uncomfortable than comic as it reaches its conclusion.

The Blu-ray extras include deleted scenes, an interview with Morris and some fascinating research footage shot in conjunction with the film. The latter wasn't mean to be funny. It's a very sober discussion with British Islamic youth candid sharing details of their lives and sense of alienation regarding their home country.

Every Day offers a bland title, a story that's a burden to market and only a hint of sexual escapades. Yet the film's normalcy is its greatest strength. It's a tone poem to marriage that doesn't sugarcoat the institution or those strong enough to embrace it.

Ned may have found a stash of pleasure for himself when a comely co-worker (Carla Gugino) invites him up to her apartment for some late-night "revisions."

The marital tension between the leads isn't given enough depth, but the damaged father and daughter moments offer a visceral charge. Dennehy transforms a stock character into a person of consequence, a bitter man still empathic enough to see the lives he's hurt along the way. And special credit goes to Miller for illuminating the challenges of a teen on the cusp of discovering his true identity.

The Blu-ray extras include a batch of deleted scenes and a crudely packaged series of cast interviews which shed considerable light on the production. Schreiber applauds the film for its theatrical nature in personal terms, while writer/director Richard Levine reveals the film's deep autobiographical roots.