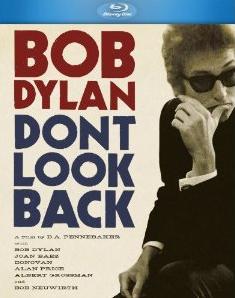 The image of a card-flipping Bob Dylan accompanying "Subterranean Homesick Blues" is so iconic it's easy to forget it came from one of the 1960s most heralded documentaries.

Bob Dylan Dont Look Back, shot in grainy but gloriously rich black and white, makes its Blu-ray debut with the artist's music and mercurial personality intact.

We hitch a ride with Dylan's musical posse as he storms London in 1965. It's not Beatlemania 2.0, but at times it feels awfully close, what with the swooning girls—and press—hanging on his every syllable.

The 1967 film, a textbook example of cinema verite done right, doesn't exactly decode Dylan. He's too shrewd to be deconstructed, and director D.A. Pennebaker (Montery Pop) doesn't bother with any conventional interview segments. It's more like a time capsule of an era when socially relevant songs stormed the music charts.

The focus isn't all on the skinny, nasally voiced singer who would help define a generation. We also see Dylan's garrulous manager, Albert Grossman, puffing his chest when a hotel employee dares to complain about the noise levels emanating from the Dylan suite.

Perhaps the most illuminating moment comes when Dylan matches wits with a hapless science student. It's an unfair fight, and you can see Dylan's pugnacious intellect roaring to life during the exchange.

Those who don't pray at Dylan's musical altar won't be nearly as engaged by Dont Look Back, but it's a fascinating snapshot of how music and culture intertwine.

The Blu-ray extras include bonus tracks (including "To Ramona," "It Ain't Me, Babe" and "It's All Over Now, Baby Blue") and commentary from Pennebaker and Dylan road manager Bob Neuwirth captured 35 years after the film's creation.

It turns out that "Subterranean" moment was originally shot on a roof top, but the wind blew the cards all over London, Pennebaker explains.

The second disk in the package features bonus material from the film's 2007 DVD release including a lengthy documentary called "65 Revisited" which features outtakes from the movie and other Dylan goodies.

Just when you thought it was safe to rent a Korean horror movie along comes Chawz to shake your faith.

This tepid attempt at blending horror and comedy is either a lame homage to the 1975 shark classic or a lazy Xerox. This time around, it‘s an oversize, man-eating wild boar terrifying the locals.

We meet a big city cop and a gaggle of comically exaggerated town folk trying to bring down a wild boar that‘s been killing with regularity. The region's farmers don't want the cops to close off the area because it'll hurt their crops, a wink to the clods in Jaws who wanted to keep the beaches open at all costs.

Other nods to Jaws include a scene where the heroes inspect a wild boar's stomach contents and a hired killer in the Quint mode.

The film seems disinterested in generating any real scares, which isn't necessarily the death knell for a horror comedy. But its attempts at humor prove far too broad to really zing, like the whacked out momma who wanders into the story from time to time.

The Blu-ray grab bag of extras includes a trio of features, deleted scenes and a Q&A session from the film's premiere.

The "Horror vs. Comedy" vignette tries to describe the unholy matrimony between the disparate genres. The director breaks down the fine art of rolling down a hill during one slapstick moment in the film, noting the actors did all the rigorous tumbling themselves. "Look ma, no stunt doubles!"