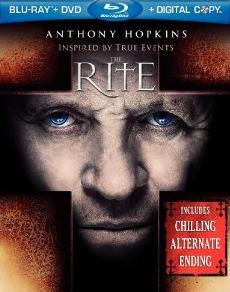 Films like The Rite have to do more than compete with the legacy of 1973 horror classic The Exorcist. They now must stand up to The Last Exorcism, the most recent devil-inspired tale to put a fresh coat of paint on this demonic sub-genre.

The Rite can't measure up to either film, but casting Sir Anthony Hopkins as the exorcist extraordinaire occasionally makes us forget that inconvenient fact.

Colin O'Donoghue stars as Michael, the handsome son of an undertaker who decides to become a priest despite a towering lack of faith. He ends up enrolling at an Exorcism 101 academy at the Vatican. Seems exorcism is a growth industry, and the Vatican needs more priests schooled in this unique skill set.

Enter Father Lucas (Hopkins), the veteran exorcist asked to take Michael under his wing. Naturally, the two clash at first, but slowly Michael realizes this line of work is more real,and dangerous, than he suspected.

The Rite manages to feel original in short bursts, particularly when Lucas tosses off lines like, "what did you expect, pea soup?" to a bewildered Michael. But that meta awareness can't evoke scares that never fully arrive.

We do get to see Hopkins flash his menacing side, something he hasn't done since playing a certain man-eating savage.

The Blu-ray extras include a short but creepy alternate ending, deleted scenes and "The Rite: Soldier of God." The latter lets us meet the inspiration for the film, Father Gary Thomas. Journalist Matt Baglio investigated a real life exorcism school where he met Father Thomas and heard about actual cases involving people with rolling eyes, foaming mouths and otherworldly tremors.

"What I heard [in the classroom sessions] is the exorcist must be the ultimate skeptic," Baglia recalls, adding the experience debunked some pre-conceived notions about this unusual profession. "I met exorcists who were very urbane ... they didn't strike me as the fundamentalists I expected."

Frankly, The Rite might have served audiences better by more closely scrutinizing the school in question rather than relying on the same old exorcism tics to frighten us.

Natalie Portman could be the most in-demand actress around, what with her newly acquired Oscar and a plum role in the superhero smash Thor.

In The Other Woman, Portman plays a less glamorous figure, the woman who convinces a married man to leave his wife and child.

Portman, who co-produced the film, stars as Emilia, a young woman who falls in love with her married boss (Scott Cohen) and ends up prying him away from his home life.

The two appear content as the film opens. But Emiilia has a devil of a time with her new step-son, and the tensions that should have faded from the divorce seem to crop up at the worst times.

The film asks Portman to be both abrasive and selfish, and while Portman deserves credit for tackling such unpleasant emotions it turns her character into someone remote we can't wrap our arms around. She's impossible to know, and even a gifted actress like Portman can't flesh out the character to anyone's satisfaction.

Convenient plot devices begin to pile up as Emilia‘s marriage starts to crumble, and Lisa Kudrow's exaggerated turn as the ex-wife drags the movie down every time she appears.

Yet the angle here is bold and fresh, and the early flashbacks which detail how Emilia and her husband first met add bracing context to the narrative.

The Blu-ray version offers the chance to see the lovely Portman in high-def, but nothing more.

Back in the 1980s, Eddie Murphy's braying laugh was a natural resource.

The SNL standout broke into features with the 1982 film 48 Hours, but his cocksure turn two years later in Beverly Hills Cop made him an icon.

Murphy plays Axel Foley, a wiseacre Detroit cop who heads West to track down the thugs who killed an old friend. He bumps into a by-the-books police department, an old gal pal (Lisa Eilbacher) and two detectives (John Ashton, Judge Reinhold) who want nothing to do with his Detroit ways.

Naturally, Axel charms or cajoles everyone he meets, and Murphy's oil-slick tongue works overtime to make it all possible.

Add a zany cameo by Bronson Pinchot, some irresistible '80s songs and an infectious score by the era's kind of swing Harold Faltermeyer and you have a film which hasn't aged a day in sheer entertainment value.

Director Martin Brest doesn't force the action or the comic scenarios. In fact, it's mostly character driven with Murphy fully in charge. Seeing Cop again makes talk of a fourth franchise installment all the sadder. There's simply no way a 50-something Murphy can match the comic pyrotechnics on display here.

The extras include a dusty but still riveting look at the making of the movie. Key players like producer Jerry Bruckheimer, screenwriter Daniel Petrie, Jr. and, briefly, Murphy himself recall how Cop was once an action vehicle for Sylvester Stallone but ended up a smaller—and cheaper—comedy with a rising star at its core.

Movie origins are rarely this entertaining, and the development process is quite revealing as to how Hollywood worked in the 1980s.

Tags: The Rite, The Other Woman, Beverly Hills Cop
Print