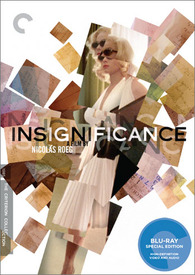 Less an evocation of the 1950's decadal essence than a critique of our sometimes arbitrary, and other times undesired, celebrity branding, Nicholas Roeg’s Insignificance employs a band of four unnamed but unmistakably iconic avatars–who recall somewhat caricatural forms of Marilyn Monroe (Theresa Russel as the Actress), Albert Einstein (Michael Emil, the Professor), Joe DiMaggio (Gary Busey, the Ballplayer) and Joseph McCarthy (Tony Curtis, the Senator)–to explore the dynamic between public and private personae as well as, by way of swirling flashbacks and mild clairvoyant fits, the astounding effects of personal timelines on current communal fabrics.  The end result, in my mind, doesn’t entirely prevail in extracting a proper emotional toll from its pool of pseudo-celebrities, but Roeg does succeed, in a way that’s not entirely new to his thematic trove, in putting forth a congeries of questions that dismantle, among other things, the prototypical masculine entity.  He’s previously assayed how cultural chasms lead to gender-based misgivings in both his feverish solo debut, Walkabout, and his narratively elliptical Bad Timing, though, in these films, he delves mostly into more intimately unique characterizations and longings; with Insignificance his focus is more centripetal, as everyone from the breathy (and busty) totem for feminine sexuality, the Actress, to the overcompensatory, whiskey-dicked Senator are molded more so from public perception than biographical acuity.

So isn’t it fitting that these shaped-from-spotlight personages are first introduced in Roeg’s film through a clinquant montage of commanding luminescence?  As the clarity of its frames comes obscured by all-things-light, Insignificance’s expository opening not only acquaints us with its players but also educes a hypnotic, dreamy aura, positing a vision of reality that’s both resplendently filtered and distantly stagy.  (That the film is based on a play is almost immediately evident due to Roeg’s unyieldingly despotic backgrounds and absentee spatial exploration.)  A fictitious 1954 materializes before us, as hordes of movie men and gawkers alike affix their eyes to the Actress’s skirt as it’s uplifted by a fan in a more leeringly-filmed replica of that very same The Seven Year Itch moment.  Roeg, throughout his piece, establishes the male gaze as one of physical emphasis (even Einstein isn’t immune), as his lens imperatively objectifies Russel’s eye-pleasing proportionality.  That he rhymes this visual thread against her character’s publicly unseen–not to mention boner-draining–maternal aspirations, however, adds a needed dimensionality to the faux-Monroe.  And although Roeg’s blanketing ideas of gender-based sexual objectives fall short of fair, this motif does afford gravity to the otherwise banal notion that celebrities are people too, and that sexist studio and social systems aren’t to be taken, if you’ll pardon the pun, lying down.

As the upskirt take is completed and the Actress is ushered away from the set, she leaves behind not only the lecherous assemblage of onlookers but also her husband, the Ballplayer–it’s not long before his figure and pride come engulfed by the sea of faceless yahoos.  But the Actress rides on, perhaps aware, for the first time, of just how fetishized and emotionally-siphoning her roles as “sex personified” have become; she was now, by way of her physically-derived fame, defined more by public expectation than her inner self.  So with overcompensation working its subconscious wonders, the Actress sought refuge in the most bookish of sanctuaries:  the Professor’s hotel room.

What ensues soon after is one of the more cinematic sequences harbored in the film, as the Actress demonstrates and discusses relativity with the Professor in a wonderfully cadenced dance of light and energy.  But the message here only scratches the cornea of the theory’s scientific heft; instead, its concept of the "observer" seems to be machinated into a commentary on the inherent variability of interpersonal perceptions.  Roeg–and, naturally, playwright Terry Johnson, who adapted his own work into this screenplay–suggests that the aggregate image of ourselves (that is, how we’re collectively pictured by all others) is, much like David Hockney's fragmented calendar-shot hanging in that seedy bar, a paradoxical, inconsistent, and splintered mosaic of the true self; what’s worse, the cultural breadth of the observing, and by proxy opinion-carrying, crowd correlates with the magnitude of this distortion.  Our four main players are, first and foremost, interpretations of people who actually lived, and moreover, people who, with varying appetites for esteem, acted as living catalysts for great cultural shifts.  But because Roeg and Johnson portray them with the same type of cursory characterizations that accord public consumption, much of their parlance and posturing speaks to how these hollow personae would relate to such notoriety.  What becomes insignificant, in this regard, is how we exact assumptions of celebrities from the commodified collage that is their public image; this, I believe, can even be extrapolated further, for it’s certainly relevant in more miniature, lay-dealings:  we ordinally rank our peers or place people within hierarchies based on largely meaningless attributes.  And, if we’re to look at things from the Professor’s mind’s eye, we can see how trivial such stratifications are on the brink oblivion.

In watching the characters gravitate in and out of both the Professor’s room and each other’s personal orbits, I couldn’t help but think the tale resembled Sartre’s No Exit – only decidedly more playful and turned cosmically inside out.  Insignificance, also a chamber story, posits its own form of hell and interpersonal imprisonment, but whereas No Exit’s condemned triad came to concede their social enormities and true selves through personal probing and conversation, Insignificance offers up a theoretical inverse: its four players become diluted and detained by their mass, as opposed to intimate, recognition.  Which is why, I feel, some of Roeg’s attempted emotional elicitations feel flat, as the characters, due to their simple, delineated demeanors, lack the strength to carry the picture’s intellectual complexity into emotional relevance.  Of course, both the Professor and the Actress demonstrate concern for their place amongst culture and those around them, though this only makes her marital woes and his political pissing matches with the Senator seem like one-sided denunciations of the male ego; the Professor, despite showing shades of being youthfully libidinous and lustful himself, isn’t insecure about personal issues, as he’s too attentive to the bigger picture–in some ways, I feel, Roeg is too.  But despite the somewhat lopsided stances and laconic gender drawings, Insignificance remains an agreeable entry into Criterion’s catalog, and offers up a dense ideological variegation that’s worthy of, amusingly enough, more notoriety.

For a winner of the Cannes Technical Grand Prize, Insignificance isn’t too formally astounding, though its luminous flourishes and nighttime ambiance translate well to this Criterion Blu-ray, as the image reads as an ardent–and, based on the company’s antecedent releases, expected–extolment of film grain that manages to retain a soft, almost pensive texture that’s befitting of the film’s surrogate reality.  Characters appear to come prepackaged with their own individual palettes, as skin tones, usually a reliable indicator of chromatic purity, seem more personally apropos than universally consistent.  But still, contrast appears healthy, and different tinges of convergent colors translate smoothly into a soft, congealed spectrum; banding is absent, excess noise not an issue.  The English linear PCM audio track is stable and crisp, if lacking in dynamic verbosity.  As in his previous films, Roeg continues to improve upon his aptitude for musical inventions (though I’ve yet to see him eclipse his incorporation of Tom Waits's "An Invitation to the Blues" in Bad Timing), and here the tonally and culturally germane songs and score sound clear and without audible interruption.

A fairly meager collective considering Criterion’s standing as propagators of insightful bonus pieces, the Insignificance BD houses two hardly spectacular interviews:  one with Roeg and producer Jeremy Thomas, the other with editor Tony Lawson.  I prefer the latter, as Lawson at least links some of Roeg’s intended themes to the work’s formal language and rhythm.  The short and standard “making of” featurette is more fun than satisfyingly forthcoming, and does a better job conveying the set’s everyday mood than it does depecting the artistic and creative processes.  If anything, Chuck Stephens’s critical essay reins supreme in the way of content, though, as a whole, these features are still more inclusive than your average release – just less so than Criterion’s standards.