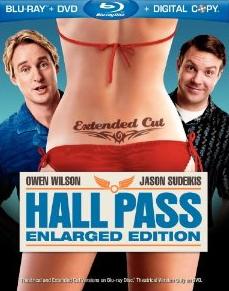 The Farrelly brothers return to their R-rated roots with Hall Pass only to find they can't measure up to the new king of comedy.

While Peter and Bobby Farrelly's films like Kingpin and There's Something About Mary upped the ewww factor, the Judd Apatow assembly line improved on their model with Knocked Up and Superbad. That leaves Hall Pass as a fine diversion, but given the target-rich subject matter the film should have been an insta-classic.

Fred and Rick (Jason Sudeikis and Owen Wilson) receive the ultimate prize from their long-suffering wives. They get an entire week to date to their heart's content without repercussions. The longtime pals are ecstatic until they realize whatever "game" they once had has long since vanished. So they try picking up women in Applebee's as well as other limp attempts at using the marital "hall pass."

Wilson and Sudeikis look suitably square, and the film's squeezes in some moral lessons between the raunchy gags. But you won't find any big laughs here, and when the Farrellys go extreme it feels inauthentic, as if they knew audiences were waiting to be shocked and they were forced to oblige them.

The Blu-ray presentation features both the theatrical and "enlarged edition" cut, plus one long deleted scene expanding on the film's aging "playah" (Richard Jenkins), a clever but superfluous moment. The requisite gag reel is so lackluster even Hall Pass co-star Jenna Fischer is shown calling it "boring."

Amanda Seyfried is Valeri, a young woman torn between two potential suitors in a medieval village. The love triangle gets shoved aside when a wolf kills a villager. The beast has been kept at bay for years by a monthly animal sacrifice, but its hunger no longer can be so easily sated.

The frightened villagers bring in a wolf slayer (Gary Oldman) to smite the creature. But their protector may be more menacing than that big, bad wolf.

Hood's love story never simmers, and the wolf effects feel like a return to the early, awkward days of computer generated visuals. Seyfried, with her luminous eyes, is just right to play the overwhelmed heroine, but the film's attempt at inserting classic lines like, "how big your teeth are?" into the screenplay feel goofy.

The Blu-ray package overwhelms viewers with Hood-related goodies, including an alternate ending, audition tapes, music videos and the thoughtful docu-feature "The Re-Invention of Red Riding Hood."

We're told the Riding Hood story stretches back to 1697 and has been re-told countless times across cultures in both written and oral form. Too bad Red Riding Hood couldn't measure up to those classic reinventions.

Kill the Irishman tells a story so remarkable it needs to constantly remind us it's based on true events.

Irish mobster Danny Greene lorded over Cleveland's organized crime scene in the 1970s with a combination of street smarts and muscle. Ray Stevenson plays Danny, a humble man who rose up from a blue-collar worker to head of the local union before embarking on a life in crime. Along the way he befriended a fellow thug (Vincent D'Onofrio), offended a wise guy (Christopher Walken) and kept a local cop (Val Kilmer) at arm's length.

The film gives only lip service to the women in Danny's life, and the narrative re-uses so many movie mob elements it could apply for an environmental grant. Danny's Irish roots are played up throughout the story but in superficial ways. A better film would explore his Celtic roots in a more satisfying fashion.

But Stevenson, despite a wavering accent, makes Danny a force of nature so powerful you'll believe every chapter in his singular crime story.

The Blu-ray extra is precisely the one you'll want to watch after seeing the feature film. "Danny Greene: The Rise and Fall of the Irishman," documents Greene's remarkable ascent through the mafia ranks. We hear from ex-Cleveland cops to Greene's ex-wife as well as watch footage never seen before.