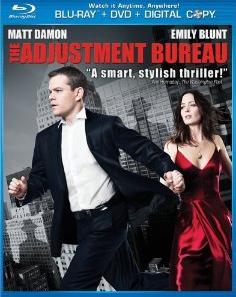 The Adjustment Bureau is neither a great sci-fi caper nor whirlwind romance. Yet the film offers just enough of both to make it worth a look.

Matt Damon is David Norris, a politician whose bumpy past derails his latest campaign. When he meets Elise (Emily Blunt), a dancer with a wild side, politics couldn't be further from his mind. It's instant chemistry, but their love isn't mean to be according to the all-powerful Adjustment Bureau which oversees how fate unfolds.

Writer/director George Nolfi deftly blends spare science fiction nuggets into the narrative without compromising the bond between Damon and Blunt. Yes, the Mad Men style hats worn by the Bureau workers seem silly when you learn their secret, but it's impossible not to root for David and Elise to give these fate wranglers a swift, hard kick.

The copious Blu-ray extras include a peek at Blunt's intensive dance training for the role and a breakdown of the film's purposely modest effects. Damon seems in awe as he sets foot on the grass at Yankee Stadium to prepare for a scene in the film, but the Beantown native recovers to pronounce Fenway Park the superior stadium.

Ed Helms proved he belonged on the big screen with the 2009 smash The Hangover. Now, he's leading an ensemble cast in Cedar Rapids, a fitfully hilarious fish out of water tale that proves he's more than just cubicle fodder.

Helms stars as Tim, a very small town insurance salesman selected to represent his firm at an annual convention in Cedar Rapids. The Iowa city might as well be Manhattan to Tim who never saw fit to leave his sterile hometown. Tim gets a warm welcome from Dean (John C. Reilly), a boorish but lovable fellow agent, and a sexy saleswoman (Anne Heche) does more than turn Tim's head. But can the amiable agent hold on to his morals amidst a sea of Middle American debauchery?

Every time Cedar Rapids threatens to insult flyover country Helms is there to stop it cold. And Helms is smart enough to step aside to let Reilly swipe entire scenes out from under the cast.

The Blu-ray extras include deleted scenes, a fake commercial for Tim's insurance company and a gag reel full of flubbed lines and on-set pranks. No wonder the comedy inspired such loose and natural performances from the cast.

Unknown finds Liam Neeson in a familiar role, playing the ordinary citizen you won't want to cross. The mystery casts Neeson as a traveling scientist who discovers the life he's been leading may not be real. Neeson's character hits his head during a traffic accident while en route to a Berlin conference, and when he wakes up at a nearby hospital nobody recognizes him, not even his wife.

Unknown strings along its complicated puzzle until the final reel, but the reveal is so convoluted the entire film collapses under its weight.

Yes, Neeson is the perfect fit to play a distracted scientist pushed too far, but he's no match for one of the biggest amnesia clichés in the entertainment realm.

The best of the two Blu-ray extras featured here examines Neeson's emergence as an action icon. "Liam Neeson: Known Action Hero" lets the film's cast and crew speak to his instant ability to connect with audiences and his impressive height. But for Neeson, it's all in a day's work. But leave it to the lanky Irish actor to put things in perspective regarding a fight scene between himself and co-star Aidan Quinn.

"It's two guys in their 50s pretending to be 30 year olds," Neeson says with a grin.

Josh Radnor of How I Met Your Mother fame goes the auteur route with happythankyoumoreplease, a film as artificial as its title. But Radnor's directorial debut shouldn't be easily waved off. He makes for a compelling lead, and he's savvy enough behind the camera to surround himself with intriguing actors.

Radnor is Sam, a struggling writer whose haphazard life finds order when he "adopts" a foster child (Michael Algieri) he meets on the subway. Sam's best galpal Annie (Malin Ackerman) struggles with a medical condition which prevents hair from growing on her body. And then there's Mary-Catherine and Charlie (Zoe Kazan and Pablo Schreiber), two lovebirds trying to figure out the next stage in their courtship and doing a lousy job at it.

You'll need more than two hands to tally up the film's flaws, but for every miscue there's a beautifully timed exchange or laugh that arrives right on cue. And kudos to Tony Hale, the Arrested Development star cast as Annie's overbearing suitor. Hale modulates the character from low-grade stalker to wounded soul in convincing fashion.

The film arrives with some deleted scenes and a feature examining the appropriately bruised tunes created by Jaymay for the film. The former includes a scene sorely needed in the finished cut. Young Rasheen loses his cool when a neighborhood kid bumps him roughly on the street. Radnor's film paints the character in darn near beatific shades, where a real foster child might have some rough edges caused by years of neglect.