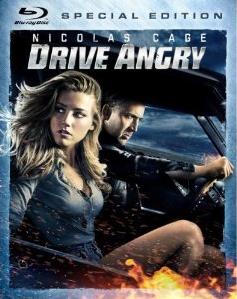 Drive Angry scorches across the screen like the Grindhouse movie time forgot. But the latest commercial dud from Nicolas Cage runs out of petrol well before its uninspired finale.

Cage stars as Milton, a mysterious man trying to track down a preacher (Twilight's Billy Burke) who killed his daughter and stole her infant daughter. But Milton himself is being hunted by a nattily dressed man known as The Accountant (William Fichtner), a fellow whose existence slowly reveals Milton's true character.

Milton draws a beautiful waitress (Amber Heard) into his personal manhunt, the duo making an unlikely team against both the unholy preacher and the unrelenting Accountant.

For a good half hour Drive Angry is pure exploitation bliss, with Cage's mumbled line readings complementing the goofy goings on. It's soon clear the story lacks a creative roadmap, so we're left with story arcs that bump into each other with an ungainly thud.

Plainly speaking, it's harder to recreate a quality Grindhouse experience than it looks, although Fichtner's performance shows he would have thrived in the genre's glory days.

Stanley Kubrick devotees can now a sample a bit of the ol' "ultra violence" in high definition. A Clockwork Orange, one of cinema's most uncompromising visions of societal decay, gets the Blu-ray treatment along with a crush of fan-pleasing extras.

Malcolm McDowell plays Alex, the head of a roving gang of "droogs" who plunder, rape and worse whenever the mood strikes. When the law finally catches up with Alex the film's microscope shifts from the morally unhinged youth to the travails of the psychiatric method and its potential for government overreach.

Orange has lost precious little shock value over time, a tribute to Kubrick's subversive way of tapping into our darkest visions. Few directors would dare marry a graphic rape sequence with an a cappella version of "Singin' in the Rain," let alone get away with it as he does.

The film comes in a 40-page hardbound book jacket filled with tidbits on the film's initial release and rare photos. The official Blu-ray extras include two new items—"Turning Like Clockwork," a short documentary on the film's enduring legacy, and another doc letting McDowell share his reflections on working with Kubrick. The package also contains a separate disk with the feature-length documentaries "Stanley Kubrick: A Life in Pictures" and "O Lucky Malcolm!"

"Turning Like Clockwork" assembles a group of mostly British artists to examine the film's legacy. Director Mary Harron (American Psycho) contends the movie presaged the punk movement of the late 1970s. Film historians recall how British Home Secretary Reginald Maudling demanded a home viewing of the film prior to its release, sparking a censorship debate that would last for decades.

Think about the 1968 western classic Once Upon a Time in the West and you can't escape the film's close-up images. In high definition, every bruised whisker and scab helps tell the saga of a black-hearted killer and the men out to stop him.

Henry Fonda, cast gloriously against type, is the blue-eyed assassin hired to wipe out a family set to inherit valuable water-bearing land. Two disparate souls (Jason Robards, Charles Bronson) try to stop him, each for his own personal reasons. But circumstances and motives evolve as the film heads toward its shattering finale.

Director Sergio Leone lets West breathe, even while luxuriating in those claustrophobic close-ups. Modern audiences may need some time to adjust to the glacial pace. The opening credits alone drag on for what seems like half the film, almost like a parody of a serious auteur at work. The payoff moments—including some gunplay today's directors could only hope to emulate—lend credence to Leone's masterly pauses.

Both the restored and theatrical version come in the single Blu-ray disk, although the former adds less than a minute of fresh content. Otherwise, the release repackages the densely researched extras included in a previous DVD presentation including The Wages of Sin, Something to do with Death and An Opera of Violence.

The latter lets Sir Christopher Frayling, author of "Sergio Leone: Something to Do with Death," recall Leone's family history. Both parents worked in cinema, letting the future director "grow up in the film world of Rome."

"A lot of his dad's contacts were how Sergio got started," Frayling says.

Tags: Drive Angry, A Clockwork Orange, Once Upon a Time in the West
Print