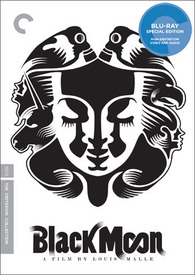 Ah, the good ol' Battle of the Sexes.  Ever since the era of our primordial genetic predecessors, males, through no fault of the current human model, have prospered thanks to reproductive exploitation of their female counterparts.  As the permutations of early replicator cells downshifted the size of the male sperm, the larger female egg became forced to bear the brunt of the propagatory load, in turn encouraging an asymmetry in reproductive rates across the genders:  men, in the most basic sense of the word, became free to pass on their molecular makeup with increasing ease in comparison to the less frequent, more monolithic fecund capacity of their mates.  Filter this alterity through a few billion years of evolutionary advancement, allow it to bubble and congeal within the context of conscious thought, pour it over our contemporary cultural stews, and what results is a hard-to-swallow brew of divergent outlooks and an aftertaste of gender disparity.

Louis Malle explicates this emergent imbalance of reproductive impetuses at the onset of his 1975 work, Black Moon.  An artist and aesthete with a vested interest in both maturational processes–especially within sexual, ideological, and empathetic realms–and imbalances in power, the prolific French filmmaker liberally weaves together these thematic threads into a coalescence of surrealist science fiction.  A landscape ravaged by the throes of war materializes before us, its combatants abscinded among genetically-derived gender lines.  And as if being wound by a centralizing force, the narrative coil of Black Moon, much like that of Ingmar Bergman’s Shame, begins in the environs of its battlegrounds before sucking its protagonist towards its savage vortex.  Lily (Cathryn Harrison), fair-skinned and nebbish, speeds through the littered ruins of the land only to end up, as if it were inevitable, being thrust upon the first of the film’s many overtly phallic avatars: a tank with a barrel-complex of more than suggestive shape.  She stops before the mechanical beast and, overwhelmed and bewilderment, bears witness to the systematic execution of a group of women soldiers.  It’s only after this slaughter that the men–with the scope of their artillery a likely commentary on lopsided political privilege–reveal the hair of our protagonist and open fire on her as well; by chance–or perhaps in an allegorical nod to fate–she escapes, fleeing into a sporadically wooded countryside.

This rather innocuous act of evasion actually guises a down-the-rabbit-hole story-shift into nebulous reality that openly nuzzles the nexus betwixt human ecology and our warring sexes.  The daunted young lead stumbles across a rustic estate in which natural tendency–or, rather, Malle’s phantasmally stilted take on it–eclipses the manufactured parameters of civilized life.  Interspecies bliss comes to abound throughout:  An elderly woman (Therese Giehse) converses freely with a rat; a piglet sits atop a highchair and noisily bemoans Lily drinking its glass of milk; and snakes, millipedes and other cylindrically-shaped, penile stand-ins–the most significant being an elusive unicorn–squirm into discovery as the girl begins wrapping her head around this tangential reality.  No doubt, Malle is offering up a sort of, albeit naive, free-form examination on feminine sexual discovery, but what makes his approach unique is that he favors highlighting subconscious sources of inter-gender friction:  verbal versus physical cues, institutionalized sexisms, and genderized practices in the arena of child rearing.  In this, Black Moon’s surreal cinematic universe is less a tableau of contemporary living than it is an abstraction of latent injustices, those of which betray the natural evolutions and personal inclinations of many an individual.

If only it all worked, or was more wholly realized, or was less symbolically clunky.  Always the gambler, Malle doesn’t achieve the same payoff he did in formalizing barriers of spatial and aged varieties in his previous film, Lacombe, Lucien, nor does he evoke the observer/subject dynamic of sexual awakening as successfully as he’d come to do in 1978’s Pretty Baby.  In this, Black Moon is effective in the way Malle eschews societal staples in order to craft a world where interaction can blossom intuitively: where violence can be compartmentalized into spheres of survivalist need and of macho posturing; where people glean more about life through sensorial recognition than manufactured convention; and where the innate innocence of nature has yet to fall to social order.  But even as the juxtaposition of Black Moon’s two realities reads adequately as a representation of an individual’s internal wars, its relentless symbolic layering is too often propelled by the arbitrary or the obvious–the director’s subversively metaphoric visuals bristle against his otherwise uninspired cinematic language.  To be sure, the film reads as one of an emboldened–not to mention relevant–social conscience, but Malle's vision comes across as contented in way of thematic exploration, as he never grants his aeriform observations a chance to fully solidify.

The soft chromaticism of Sven Nykvist’s photography lends well to this Criterion 1080p digital rendering, even if I feel the picture would have benefited from a more enlivened color palette.  But despite such anemic filtering–probably intended to evoke an airy, dreamlike existence–some of the imagery is indeed quite striking, especially during exterior sequences.  A scene where a farmhand (Joe Dallesandro) buries a fallen female soldier exhibits both remarkable fine object detail and an impressively nuanced array of earthy, terra-cotta browns.  The score by Diego Masson and the bolstered sound design add well to the tonal unease, and accord a reverberant surround-sound experience.  If only we could hear Dallesandro utter his trademark pronunciation of "Who-ores" in high-def!

Barebones. Ginette Vincendeau’s essay is the high point here, as the author capably delves into Malle’s body of work, exacting his evolution as a filmmaker with stylishly understood prose.  But the disc’s sole featurette is merely a ten-minute interview with Malle that’s ten years my senior, which leaves room, apparently, for only a stills gallery and a theatrical trailer.  The final product is more supplementary sparse than most of what hits the mainstream market.