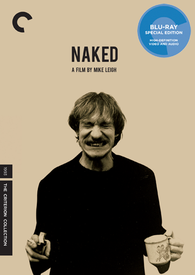 One of the more interesting pieces of Naked’s ideological puzzle lies in Mike Leigh’s handling of his principal character, Johnny (David Thewlis), and the way the loquacious nomad–who, at times, can be both physically and emotionally acerbic—burrows his way into the consciousness of those he comes across.  Throughout most of the film this dynamic is presented with a farmer’s-tan contrast of serpentine predator and naïve prey:  Johnny practically acquires permission to accost his unthinking victims through his quick-witted charm and sly inquiries.  (Phrases like “If that’s alright with ye, love?” “Do you mind if I come in?” and “Oh, so I could have a shower then?” act the part of verbal passages through the thresholds betwixt innocence and exploitation.)  But in the in medias res opening something different transpires:  We’re introduced to the man as he rails away at a woman’s womb, his thrusts becoming more fierce as she pleads increasingly for lenity.  Of course, this could easily be seen as an act of rape, the keystone component of which (I.e. a lack of consent) grinds unmistakably against his otherwise ask-before-abusing shtick.  But as we delve deeper into Leigh’s narrative and become further enveloped in the folds of Johnny’s labyrinthian logic, we inevitably come to wonder what exactly transpired at the inception of that first encounter.  Was there lingual trickery involved or did it spawn more from a savage overpowering than a semantic ploy?  Were his subsequent requests, if you will, rooted in intentional sleight of hand or atonement for past indiscretions?  Was the drifter trying, and failing, to be more interpersonally responsible or was he still merely guising ulterior motives?  Can Johnny be seen as some sort of allegorical devil?

It’s this last implication that I can’t help but be a bit infatuated with, as the character’s habitual bouts of beguilement suggest that he’s amusingly pushing gudgeons to behave in ways outside their normal bearings.  Johnny seems at odds with traditional takes on morality and social order, yes, but the question remains as to whether or not he’s definably evil or if his well-read, thoroughly-thought-out vantage point merely channels his mind toward the psychological ransacking of others.  But the acceptance of the former, more fiendish interpretation must come with conceits.  Johnny could not be, in any literal sense, an actual demon, but instead a personification of the mythical figure’s manipulative prowess, with a special emphasis on subverting others’ behavioral norms.  (At one point he amuses himself by asking a girl to whom he’s superiorly insightful whether or not she believes in the devil, then probes further by having her expand on what she thinks he looks like; she responds, in an almost hilariously appropriate premonition of our internet age, that he’d resemble a “troll” doll.)  But is this, the delusion of others, the most contemptible form of interpersonal conduct?  Leigh doesn’t seem to think so, as his thematic gears grind in a more circularly logical sense, evoking the idea that, if these actions are so bad, then what is to be thought of an omnipotent figure either forcing the hands of others or refusing to mercifully intervene when agony arises—what if God is more malicious a figure than Satan himself?

Jeremy G. Smart (Greg Cruttwell) is wealthy, powerful, and more than a little misanthropic, misogynic, and sociopathic.  He is also, if we’re to buy into such an analysis, the corresponding deity to Johnny’s metaphoric devil, for he uses his unyielding, socially-granted omnipotence (I.e. being an affluent, white, thirtysomething male) to quite-literally manhandle those women unfortunate enough to make his acquaintance.  Leigh rhymes the apocalyptically convergent storylines of the two men, Johnny and Jeremy—a dynamic of (de)humanized contrast that’s enchantingly underscored by the strings of Andrew Dickson’s dreamily light yet reflectively somber score—with a symphonic sort of grace, but such symbolic threads only allot us a mere glimpse at the filmmaker’s thematic tapestry.  Issues that are accorded by this cosmic contraposition are presented on the movie’s surface, to be sure–Johnny’s brilliant if not bombastic parlance at one point all but convinces a security guard (Peter Wright) that any God would have to, by concession, hate him (what a devilish thing to do, no?)—but it would be irresponsible to dismiss Leigh’s take on humanity as one of supernatural influence or fatalism.  No, in spite of these spiritual innuendos, a far more satisfying way of looking at the work’s absurdist slant would be to examine how this connection between Higher Powers and plebian suffering can act as a dissection of relationships in post-Thatcher London, and, by extrapolation, humanity at large.  And it’s through Johnny’s rampant dissolution of behaviors and imperatives that Naked exposes the true nature of societal structures, particularly those that wall-up, rather than unify, individuals from one another.

But does knowing of and acknowledging, Leigh appears to postulate, these manufactured social divides prove in any way cathartic?  As Johnny bounces episodically amongst the London lower class like some sort of serpent-tongued Odysseus, he seems to gain gratification from acting the role of apathetic puppet master, often externalizing people’s more socially submissive sensibilities.  The mystery, however, lies in whether or not this mode of hyper-criticism is more a commentary on the projection of self-hatred or if Leigh intends it as something grander–a eulogy for a wasted intellectual mind, perhaps.  Clearly well-educated, Johnny eschews bettering the society that has offered up explanations for everything from the origins of the cosmos to the inner-workings of our bodies—not to mention his own perspicacity and sense of actualization–harping on the futility of hope within our current world mold.  In this, the corrosive transient can be at least partly interpreted as autophobic, as there appears to be a negative correlation between the knowledge society grants him and, throughout most of the film, his derisive feelings toward it.  We can even take this concept a step beyond Leigh’s satirical tableau of post-Thatcher London and apply it to the world at large:  Is there any reason why inane attitudes and actions can’t be seen as byproducts of progression-inspired intellectual complacency?

Of course, the Naked's undeniable narrative focus on Johnny and his exploits may make for an interesting portrait of a rather eccentric individual, but I’m far more interested in how the film functions beyond, as it’s been unfortunately misappropriated, a character study.  Rather, its protagonist acts more as a human catalyst in Leigh’s intellectually dizzying exposé, enabling the exegetic notes that touch upon both the bigger picture of existence as well as the social imbalances–those forged from gender, economic, educational, psychological and empathetic differences–that we’ve come to accept, even expect, in our modern civilization; moreover, it's within the walls of this civilization that knowledge, Leigh seems to think, becomes even more torturous than ignorance.  Take for example a point during Johnny's odyssey where he comes across a surly Scottish man (Ewen Bremner) in search of his girlfriend.  After initially chuckling to himself and having some rhetorical fun at the dimwitted bloke’s–and, then later, his black-haired, blue-jeaned lass’s–expense, our effusive principal finally looks on exhausted as the two dancingly orbit around him in mid argument.  They whirl about, and he ambles onward and the camera glides alongside the trio in an attempt to formalize the idea of how we, as people, seem to have our own innate gravitational pulls–intimacy, regardless of its volatility, is still more biologically compelling than isolation.  The couple eventually drifts away into the darkness, leaving Johnny to stand in quiet detachment as the London fog rolls over him; he can probably portend what's to become of the two barely-literates, and he appears to give pause in considering where they'll sleep, what they'll eat, and how they'll live.  But whereas they're together and unbothered by the bigger picture, Johnny's just there:  alone in space, alone in his thoughts, alone in the fog.  It's through these kind of flourishes, those which emphasize his characters’ lack of affectional fulfillment, that Leigh allows for a glint of hope to penetrate his otherwise aphotic urban pictorial.  He appears to imply, by way of glaring omission, the potential for emotional potency in things like community, family and love as well as how the promise of another day bests the cataclysmic alternative.

Naked is a work of ideological density, and its evocative dialogue comes with a knowingly ambiguous, even contradictory, outlook on life.  Though the piece’s tone is certainly indicative of a given epoch, Leigh’s masterwork, as evident by its feverish disembowelment of widespread convention, extends far beyond any specific cultural context or singular interpretation; rather, a universality permeates its vested interest in social hierarchies and the oppression that buds from them.  Even through Johnny’s constant lampooning of others’ obsequiousness there remains this delicately ascribed sense of humanity—Thewlis’s nuanced delivery conveys traces of sympathy for those being unwittingly handicapped by a prejudiced society.  In Naked, Leigh finds a way to conceptualize some otherwise ineffable aspects of personal and interpersonal evolutions and present them before us in an unrestrained mélange, one that eruditely examines the various power struggles that accompany our contemporary state of coexistence.

The image as sharp as Johnny’s maddening witticisms, the audio as piercing as his relentless probing, Naked sensorially seers with this Criterion Blu-ray release.  Leigh’s visualization of a world torn by expectation and reality boasts an appropriately cool palette that’s speckled with hints of warmth and luminosity.  The clarity of the image and stability of the soundtrack is never more apparent than in a scene that shows Johnny meandering back-and-forth from kitchen-to-living room as he’s being followed by a paramour.  Not only does DP Dick Pope’s lens evoke the idea of spatial compartmentalization, but the constant shift between the two differently lit rooms demonstrates an expertise in photographic balance and directorial cadence.  All of this is, naturally, accompanied by the audial assault of Dickinson’s strings and Thewlis’s verboseness, making its visual and aural clarity a champion feat for any home format.

I quite enjoyed the perspective that the critical essays by Derek Malcolm and Amy Taubin afford, as the former places the piece in the context of oeuvre and the latter splashes around in it from psychologically feminist sentiment, a testament to the diversity of angles from which the material can be tackled.  Neil LaBute does well enough in combing through the piece’s themes with abbreviated aplomb, and an interview with Leigh for the BBC program The Art Zone comes across as more amicably personable than pointedly didactic.  His short film “The Short and Curlies” is also included; it features a younger Thewlis as a quirkily comedic conversationalist, the likes of which can easily be seen as a precursor to his far more venomous role in Naked.