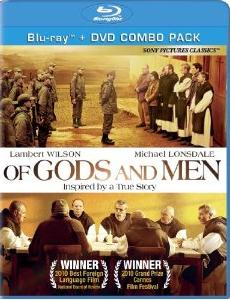 Of Gods and Men recalls a real-life clash between religious extremes, one showcasing the worst element of one and the most honorable aspects of the other.

In the 1990s, a group of French Christian monks based in Algeria were confronted with the ultimate test of their faith. A marauding band of Islamic terrorists just slaughtered a team of foreign workers near the monks' home. The holy men could always flee or ask the military for protection should the terrorists visit them next. But the former meant abandoning the people they came to heal, and the latter would invite a corrupt government into their midst. But keeping true to their ideals in the face of death is something beyond the scope of ordinary prayer. Or is it?

Men luxuriates in the day-to-day rituals of the monks, the dedication to service that speaks to their calling and keeps their fears at bay.

Spiritually bound dramas can handcuff screenwriters, robbing them of the emotional peaks most characters exhibit. But screenwriter Etienne Comar finds the humanity in the monks all the same, tugging gentle revelations from their conversations as well as the way they go about their chores.

What Men could use is a snip or two. The debates between the monks over their fateful plan go on forever, and what initially fascinates ultimately consumes far too much screen time. Yet Lambert Wilson‘s performance as Father Christian, the group's de facto leader, provides a portrait in courage unlike any in recent screen memory.

The Blu-ray extras include a chat with John W. Kiser, author of the book, "The Monks of Tibhirine."

"It's a love story wrapped in a horror story," says Kiser on the fraternal bond felt by the monks in this chilling historical drama.

The other extra, "The Sacred Tibhirine: Further Investigation," reveals Comar's mission to meet the families of the monks in question before completing the script. We also see snippets of mourners celebrating the real monks' sacrifice after the terrorists carried out their brutal threats.

Hobo with a Shotgun carries on the not-so-fine tradition of the 2007 Grindhouse double feature Planet Terror and Death Proof. It's more of a true indie effort than that bloated twin bill helmed by Robert Rodriguez and Quentin Tarantino. Terror and Proof tried too hard to go grunge. Hobo delivers the genre's essential elements without breaking a sweat or the bank.

Rutger Hauer stars as the Hobo, a wanderer who ends up in a decrepit city where criminals rule the streets. The Hobo, obsessed with buying a lawnmower to call his own, ignores the atrocities around him. But when a pretty prostitute (Molly Dunsworth) is threatened, the Hobo's inner paladin awakens. A few shotgun blasts later, and the Hobo gets the attention of The Drake (Brian Downey), the city's vicious ruler.

Hobo is crude, repulsive, coarse and bloody. Movie fans who find those adjectives appealing should be in cinematic heaven. Hauer manages to give a full-bodied performance amidst the depravity, anchoring a series of gore-drenched sequences with a semblance of soul.

The film arrives with a gaggle of extras across two discs. Viewers can sample several commentary tracks, a brief alternate ending, video blog entries, deleted scenes and a wildly entertaining feature dubbed, "More Blood, More Heart: The Making of ‘Hobo with a Shotgun.'"

"What the hell is this?" recalls Hauer of his first reaction to the Hobo script. The veteran actor trusted his instincts and signed on all the same, adding another cult film to his resume.

Director Jason Eisener wanted the original Hobo from the trailer, David Brunt, to play the same role in the feature film. But the eccentric Brunt went missing for a while and ultimately admitted he wasn't physically able to play the part.

That's only one of many tasty revelations found here, a treasure trove for junk movie lovers and anyone who ever drooled over the notion of making a movie so bad it‘s good.

Tags: Of Gods and Men, Hobo With a Shotgun
Print