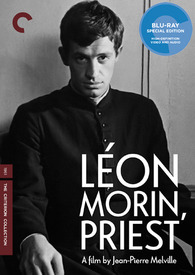 The typifying constituent of a Jean-Pierre Melville film lies not in, as they're so often associated, criminal vocation, but rather in realms of obscured, or traditionally subverted, moral boundaries.  His works tend to take advantage of the rift forged by contrasts in professional acumen and human appetite, as he both elides judgment and eschews so-called “big” issues in favor of wholly actualizing his cinematic microcosms and the characters who dwell within.  As first seen in Le Silence de la Mer and later in Les Enfants Terribles, Le Deuxieme Souffle, Le Cercle Rouge and, of course, Leon Morin, Priest, Melville fixes his efforts firmly on immediate interactive peripheries, allowing his filmic worlds to act as exceptions to universal constants: criminal action is oft confined by unspoken etiquette, police officers, perhaps due to bureaucratic restraint, come across as seedier than their felonious counterparts, and any and all social consequence never seems to extend beyond the celluloid realm.  In this, I find it difficult, at least at times, to meet Melville on his own terms due to my penchant for extrapolating what I can from works in the way of both artistic and contemporary applications—this type of critical mode can’t be used to penetrate Melville’s oeuvre, as the director designates his films more as disconnected entities than cultural commentaries.

Leon Morin, Priest is of no exception.  Employing the Axis’ occupation of France as a tonally apropos backdrop, Melville uses the period’s oppressive implications as a way to draw upon the mystic power of absenteeism:  How it’s often what’s missing from our lives, as opposed to what we consciously endure, that latently impacts our mental and emotional faculties.  It’s an interesting hypothesis, to be sure, especially as the story’s temporal context allows for one life-staple in particular, sex, to be glaringly omitted.  Whereas as the women in the film must go without physical gratification due to man-demanding effects of war—there's also the possibility of being widowed, as is the case of the perceptional center of the picture, narrator Barny (Emmanuelle Riva)–the work’s sole masculine channel, eponymous pastor Leon Morin (Jean-Paul Belmondo), is also endowed with sexual longing as per his professional vows.  In a particularly telling scene, the sole glance we’re allotted into the young priest’s psyche, Morin reveals his motivations for entering the seminary, citing that he decided to join the clergy before reaching an age of sexual enlightenment.  As such, he tends to carry himself with a certain condescending acerbity, oftentimes projecting his blue-balled angst onto the very same women who approach him for guidance; it’s as if his petty dance of emotional seduction and physical denial is justified, through his logic, because he too has unrealized urges.

But because the narrative is told from the standpoint of Barny, the film should be read as a somewhat sensationalized account–Melville even includes anecdotal aside scenes that cater to a more stream-of-conscious conceptualization.  Morin is also framed, many times, from oppressive angles as if to convey his smug impositions through the lens of our storyteller.  In fact, much of the film’s visual language imparts the notion of some sort of tangential sense of recollection, from the shot that lingers, for whatever reason, on the patterny grain of Morin’s wooden door to the seemingly inconsequential, anti-Semitic graffiti scribbled upon village walls.  The finest aspects of Leon Morin, Priest express an understanding for the fleetingness of both memory and discernment, and this intentional vagueness between artist and audience smartly mirrors the Absurdist innuendos of Barny and Morin’s conversations about God.  (Melville himself was an atheist, though the film’s denouement comes across as spiritually ambiguous, insignificant even.)  And yet, despite the subtlety with which his visuals are imbued, Melville still paints his characters with a sheen of capsized moral expectations:  The priest is less human than the atheist, the Nazi soldiers more compassionate than the lecherous American liberators, the kindness of strangers more apparent than that of supposed friends.  The message that we shouldn’t use labels in measuring others’ capacity for clemency is a worthy notion, naturally, but it’s overshadowed by the simplicity and rather assumptive motif with which it’s evinced—the potency of Melville’s main point regarding invisible behavioral catalysts weakens under the weight of these desultory annotations.

I feel that most of Leon Morin, Priest succeeds even if its musings on the effects of intimate severance are treated a bit too absolutely.  This, I realize, is merely typical Melville—he’s wont to explore the immediate details of a journey while generically broadening the social undulations left in wake—but I feel that the stern tonality with which Morin’s portrayed takes away from the dimension of his character.  In this, I feel the picture works best as a formal study on memory and an abstract look into unconscious drives and deprivation, with its forthcoming visuals furthering the power dynamics that are inherent to such themes.  But for all its good, I can’t help but feel there’s a trivial aftertaste to the film, as Melville seems more intent on arbitrarily paralleling cultural agents (faith, intimacy, circumstance) than he is in delving into their unique applications.

The sensorial emphasis of Leon Morin, Priest is immediately apparent in this Criterion Blu-ray release, as Barny’s appetent gaze—conveyed through the photography of Henri Decaë—alluringly fixates on the textures of everything from the crackled walls of Morin’s apartment to the soft fabric of his vestments.  Detail is remarkable in close-ups and the image exhibits the Collection’s usual ardency for grain structure, with a consistency existing even during more complexly lit scenes like the impossible reverse-shots of Barny and Morin’s first meeting.  The audio track crisply elicits the dialogue’s nuanced intonations, though I did detect a bit of acoustically muddling at the onset of confessional sequence. Martial Solal's score is also well established in this aural representation.