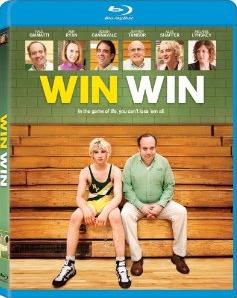 Writer/director Tom McCarthy isn‘t a Sundance wunderkind or an iconoclast auteur like Terrence Malick. He's merely the force behind a trio of films showcasing his wry humor and penchant for flawed heroes.

McCarthy‘s Win Win stars Paul Giamatti as Mike, an elder care lawyer and wrestling coach who bends the rules to improve his financial fortunes. He manufactures a way to serve as the guardian of an old client (Burt Young) to gain access to the man's pension. The move saves Mike's flailing law business, but it also introduces him to the man's grandson, Kyle (Alex Shaffer), a runaway teen who just so happens to be a wrestling prodigy. Mike's money woes are a thing of the past, and his wrestling team suddenly has a bright future with Kyle leading the way. But the new people in Mike's life threaten to disrupt his meticulously crafted comeback story.

Giamatti remains the perfect embodiment of a decent man forced to set his values aside for survival. And young Shaffer goes beyond standard teen angst in his big screen debut. Kyle refuses to break no matter how many obstacles appear before him

The Blu-ray extras allow McCarthy and co-writer Joe Tiboni to share memories of their own high school wrestling days, experiences captured in Mike's story. One of their coaches used to smack the players—hard—in the face before a match to get them primed for battle, the same tactic used on Kyle in the film.

"Family," a traditional "making of" segment and two short deleted scenes round out the extras.

Gibson plays Walter, a toy company executive mired in a deep, dark depression. After a failed suicide attempt he finds a beaver puppet waiting to be discarded. He picks it up, places it on his hand and the creature comes to life. Suddenly, Walter can function again, both in the board room and the bedroom with his very patient wife (Jodie Foster, the film's director). But can Walter really live with a furry puppet by his side at all times, or is it simply a sign of his rickety mental health getting worse?

Gibson makes the high concept drama work, both with his vocal performance as the Beaver and the way his hangdog eyes reflect a soul in crisis. But he and Foster make the least believable on-screen couple in recent memory, and the third act fails to connect the neurotic dots.

"Everything is Going to Be OK: The Making of The Beaver" lets the cast pontificate on the project's many challenges, including pinning the right tone down.

"You could make it a big, broad, fat, high-concept comedy or a dark, dark, dark, dark tragedy," says Foster of her passion project. The actor/director, who apparently likes to use the same word over and again, hints at Gibson's recent headlines when she describes how the film project overlapped with their legendary friendship.

The Blu-ray extras also include a commentary track with Foster and two brief deleted scenes.

Never mind the 9/11 "truthers" and those who still can‘t swallow the narrative regarding the Kennedy assassination. Trollhunter gives us a new conspiracy, one where the government keeps news of a troll army a deep, dark secret.

This Norwegian pseudo-documentary finds a trio of reporters who think they're investigating a series of bear attacks. Reality bites them when they meet Hans, a man tasked with curbing the troll population so it doesn't become front page news. Hans is tired of keeping the trolls' existence a secret, so he allows the young filmmakers to capture his troll-hunting exploits on film.

The narrative unfolds in proud "found footage" fashion, as video shot by the trio is pieced together for our amusement. The results are smoother than The Blair Witch Project and more authentic than the [Rec] films. It's also far more whimsical in nature, even though the trolls in question can get rather nasty when provoked.

Trollhunter feels like a one-gimmick yarn, and for a good 30 minutes that's precisely what it is. But the more the troll history is revealed, the richer the story becomes. It helps that the movie never takes itself too seriously, nor does it take its mockumentary roots for granted.

The hodge podge of extras includes a skippable "Improv and Bloopers" segment, a peek at how the trolls were brought to life by the film‘s FX squad, deleted and extended scenes plus a standard "Behind the Scenes" featurette.