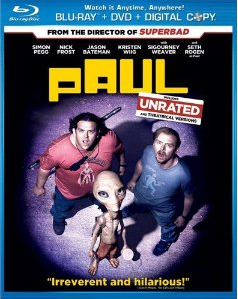 The great Simon Pegg and Nick Frost reunite for Paul, a nerdy sci-fi comedy that proves the third time isn't always the charm.

Pegg and Frost, so good in both Hot Fuzz and Shaun of the Dead, play a pair of British geeks visiting a comic book-style convention in the states. Their RV interrupts a car chase one night, and they end up meeting a runaway alien named ... "Paul" (voiced by Seth Rogen). The pair decide to help Paul return to his home planet, a task made harder by the relentless U.S. agents (including a stern Jason Bateman) eager to recapture Paul for more testing—or worse.

Along the way the geeks pick up a fundamentalist Christian with a bum eye (Kristen Wiig) who sees the light after getting a gander at Paul.

Paul marks the first big screen Pegg/Frost collaboration without director Edgar Wright, one reason why the comedy doesn't click as effortlessly as their past films. Wiig wrings plenty of laughs out of her character's transformation, but the bickering between Pegg and Frost alienates us from their bromantic story arc.

The expansive Blu-ray extras include a bloopers reel, a compendium of Pegg's silliest facial expressions, a lovingly detailed "making of" featurette and "The Evolution of Paul." The latter recounts how director Greg Mottola initially feared how much work using a CGI alien would be, only to learn his fears were more than justified.

The idea behind Paul came to Pegg during the filming of Dead, and he used a sketch he made of the wide-eyed alien as the inspiration for the creature who eventually graced the film.

The finished version of Paul is a hoot, partially due to Rogen's goofy line readings. If only Paul the movie measured up to Pegg's initial inspiration.

James Franco‘s disastrous Oscar gig won‘t go down as the actor‘s low point this year. Your Highness will.

The medieval pot comedy showcases the dubious talents of its star and co-writer Danny McBride, but it also drags Franco and Natalie Portman along for the embarrassing ride.

McBride plays Thadeous, the foolish brother of Fabious (Franco), a warrior who just lost his love to an evil sorcerer (Justin Theroux). Thadeous is enlisted against his will to help his brother rescue the fair maiden. But Thadeous isn't the heroic type—just ask anyone who‘s known him for more than five minutes. Along the way the pair meet up with a feisty warrior (Portman) who helps them on their quest and adds some spice to their road tripping.

Your Highness occasionally comes to life during the action sequences, under the supervision of director David Gordon Green of Pineapple Express fame. But the limp gags and McBride's oppressive shtick quickly return to douse any flickers of joy.

It's not as if the sword and sorcery genre doesn't lend itself to parody. Just ask the Knights who say "nee." But Your Highness feels like a Mad Libs assignment filled out by a 13-year-old who just discovered how to spell all the major dirty words.

The Blu-ray features both the theatrical and unrated editions, as well as deleted, extended and alternate scenes, plus snippets revealing the cast saying even more naughty phrases. The accompanying gag reel offers bigger smiles than the film itself, proving that even a future Oscar winner like Portman had a hard time talking dirty with a straight face.

In "Damn the Gods! The Making of Your Highness," we learn McBride entered film schools hoping to direct, not act, in feature films. He was eventually dragged in front of the camera by fellow film student Green, a partnership that will hopefully yield funnier fare than Your Highness.

The superhero genre could use a good ribbing after audiences endured four costumed crusader films this summer. But Super isn't up to the challenge.

Rainn Wilson stars as Frank, a sad sack whose wife (Liv Tyler) just left him for a sleazy drug dealer (Kevin Bacon). Frank finds empowerment through the Crimson Bolt, an alter ego he creates to fight crime. But Frank's only super power is crippling self doubt. Good thing he knows how to wield a big red wrench.

Writer/director James Gunn mixed genres with far better results in 2006's Slither. Super simply can't decide what it wants to be, a superhero spoof, a societal commentary on crime and punishment, or the story of a loser who finds redemption through a funny red costume. We get the obligatory comic book exclamations when the Bolt blisters the bad guys, and the soul of his sidekick (a delightful Ellen Page) could use some self-examination. Her attempts to seduce Frank produce the film's most unique moments.

Gunn opts for a conventional ending which clashes with the rest of this twisted tale. At least Super delivers a great crime-fighting catch phrase, "Shut up, crime!"

The Blu-ray extras include a deleted scene, footage of Wilson and Page yukking it up at the SXSW festival, a "How to Fight Crime" primer and commentary from both Wilson and Gunn. The "making of" featurette reveals how much affection the film's stars had for Gunn's script. In Tyler's case, said affection is a mystery given how little she's asked to do.