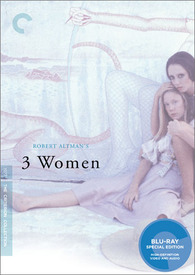 Be it intended as primordial or amniotic, nourishing or sanguine, the oft-felt presence of liquids in Robert Altman’s 3 Women is but one analogous formal nod to the idea that, throughout all human life–perhaps especially, as evoked by the title, that of women–a connectivity exists that blurs our sense of individual character.  Shot through a veil of dream-inspired ambiguity, Altman weaves a work that purposefully eschews a logical interpretation or deconstruction of its events, favoring instead to let it exist within a state of nebulous distinction.  But in spite of this purported air of impenetrableness, it’s still possible to breakdown the piece’s oneiric flourishes and unearth its creator’s still-relevant social innuendos.  Rife with symbolic and narrative layering, the film shows an artist with a definitive vision for conveying progress and power struggles as things corrosive to our grasp on personal identities.

The titular trio of the film represents but a microcosm of a larger implicative picture, with their link to each other taking the form of a social and maturational mis en abyme.  From the opening scene–which features a glacially moving low-shot that seems to glide across the surface of a therapeutic pool for the elderly, at once establishing a dynamic of human bodies and personal gravities whilst arranging life, as we so often do, within a linearly temporal context–Altman furnishes his picture with themes of social orientation and arrangement.  When we’re introduced to Pinky (Woman 1, played by Sissy Spacek) during her first day working at the aforementioned clinic for the aged, she’s but an impulsive naiveté, an on-the-nose personification of puerile individuality.  It’s after meeting her mostly-unknowing mentor, Millie (Woman 2, Shelley Duvall), that she begins shedding her jejune shrillness, turning what’s initially a case of idolism into a warped pattern of self-redesign.  But this is just a stitch in the film’s matryoshka fabric.  Just as genealogy is perpetuated throughout generations of biological coupling, behavior, natural imperatives notwithstanding, also follows a sequence of sociocultural pairings and impressions.  Pinky, through proximity and inexperience, comes to imitate Millie, who, due to media influences and accordant expectations, molds herself into something of a cosmopolitan poseur.  In this, Altman employs one of myriad examples concerning perceptional dualities, as he underscores the battle between personal projection and interpersonal repute.

But besides understanding the way habits and trends tend to imbricate from person to person, Altman also realizes, and formally conjures, the sometimes-eerie manners through which we glean such behaviors.  There’s a certain, understood sense of personal and private compartmentalization in 3 Women, one that speaks to the embarrassing-for-all-parties brand of voyeurism that’s inherent to the human experience:  How, at our most curious, we’re prone to violating others’ intimate barriers for the sake of our own fulfillment.  As such, 3 Women exudes a suitably shuddersome tonality, with its hazy lucidity invoking the shadier corners of social nuance.  Many times the frames emphasize this exchange between off-putting observers and those unknowingly observed, ensconcing the picture less with sinisterness, as it’s been too often labeled, than with the unease associated with boundary perversion.

Although this is a film that revolves ostensibly around the ever-relevant concept of identity theft (Pinky eventually stakes a claim to Millie's Soc. number, name, diary, and even bed), I feel that this thematic facet seems too distant, too illusory to be interpreted as literal.  (Altman has repeatedly stated that the idea for the film came to him in a dream, and this helps explain the picture’s aeriform dynamic of transient vision and cultural value.)  Mirrors and other reflective surfaces litter the work’s visual language in adroit arrangement, suggesting not the idea of self-reflection but instead that of an incomplete, even fragmented existence.  Altman, being an American master, realizes that such objects have broader applications than mere introspection; his framing explicates just how much mirrored views omit, and how, without fail, the images we see echoed fail to reflect reality.

It’s at the time we’re introduced to the third member of the triad, Willie (3, Janice Rule), that some of the symbolism comes to read, in my mind, as just a little too tidily forward, especially given the film’s cyclically opaque narrative and interpret-as-you-will tenor.  Willie is pensively silent.  She’s a woman who’s now old enough to know of the world’s patriarchal snares but is too confined by current life to escape them.  Married to and pregnant by Edgar (Robert Fortier), with whom she owns both a gaudy apartment complex and kitschy western-themed tavern, she spends her days painting beastly mythological murals–purportedly abstract depictions that almost too-neatly delineate the film’s undercurrent of rampant gender disparity.  3 Women, despite its title, exists within a world encapsulated by masculine demand, with the character of Millie acting as a fulcrum between immaculate youth and disenchanted adult.  As Millie bends to the cultural pressures of the surrounding world–thinking she’s treading water despite being dragged unknowingly by the social current–she’s not only heading for a life of patriarchal bondage but is blazing the trail for Pinky to do the same.  (At one point, Millie, as though she’s attempting to mold the young girl, exclaims, “You don't drink, you don't smoke, you don't do any of the things you're supposed to do!")  In this, these three women are, in some ways, one and the same, a suggestion that probably reads as more homogenized than Altman actually intended.  Indeed, a somewhat assumptive air permeates the work’s broader gender-based concerns, but the subversive denouement comes not without catharsis.  And while I personally prefer films that more precisely-than-intuitively expound upon discrepancies and power struggles, the picture’s final familial tableaux leads even me to question my own, often-brazen convictions–leaving them to be dusted up by a desert gale or slowly bleached away by its relentless sun.

The odd yet apropos chromatic punctuations of Altman’s 3 Women mark the apex of this digital rendering, with the purples, greens, yellows, and of course, pinks of its various Californian (or is it Texan?) locales emitting a vibrant contrast to the acid-washed aridity of its landscapes.  The image as a whole may seem a bit light, soft even, though this seems to align well with the picture’s diaphanous essence.  Detail ranges from excellent–Spacek’s freckle-strewn skin demonstrates great stability and color reproduction–to average, though excessive noise or enhancement are never an issue.  The picture quality as a whole exudes an organic, natural quality, making this an unforced though not altogether flooring version of Altman’s self-contained chimerical culture.

Predictably–and I say this because of Criterion’s well-earned reputation–the audio track is lossless and wholly stable, with nary a hint of distortion, crackling, or hissing to be found.  An appropriate dynamic between the woodwind accents of Gerald Busby’s sometimes-awkward score and character’s always-awkward (in a good way) dialogue makes the aural aspects of this release most impressive, even if it’s not strong on depth and dynamicism–it's good enough that I now find myself crossing my fingers for a McCabe & Mrs. Miller treatment of this caliber.

Move along, folks, nothing to see here.  While Robert Altman’s running commentary track proves a worthy if not essential supplement–hell, it helped bolster my previously lukewarm appraisal of the film–the rest of the extras are as wafer-thin as the film’s Dodge City denizens.  A stills gallery and a few trailers and TV spots round out the disc space, and the booklet, though containing a solid essay by David Sterritt, doesn’t offer much that augments Altman’s own musings.