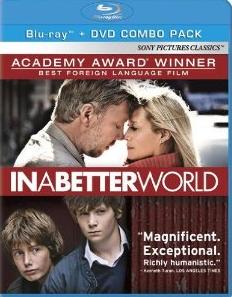 In a Better World follows a doctor named Anton (Mikael Persbrandt) who splits his time between his native Denmark and working in an Africa refugee camp. Back home, Anton's son Elias (Markus Rygaard) is hounded by bullies until he teams up with Christian (William johnk Nielsen), a lad who just lost his mum to cancer. Together, the two scare off the main tormentor and plot against a man who gave Anton fits during a schoolyard-style skirmish. But is revenge the best path when violence knocks on your door?

Director Susanne Bier draws cultural lines between the two worlds Anton straddles, and at times those lines are a bit too bright and convenient. But Persbrandt's performance, particularly during a moment when he confronts his own bully, captures the humanity of a man desperate to do the right thing in trying circumstances.

It's a lovely film about a very ugly subject, a meditation on retribution which doesn't pretend to have easily digested answers.

The Blu-ray extras include a commentary track with Bier and editor Pernille Bech Christensen, deleted scenes and a one-on-one interview with Bier.

Bier describes Christian as "the most unlikely of all villains," a boy "who becomes a real serious threat because he's so angry."

The director says she wanted to show how the two very different worlds showcased in the film are more "co-dependent" than we realize.

It's one reason the new comedy Prom stands out from the pack. It's a squeaky clean look at high school as seen through the most important social event of a teen's life. The film assembles the usual array of teen archetypes, from the pretty, perky blonde to the misfit who can't get a date no matter how hard he tries. But the mostly unknown cast acts as if this is the first time these characters hit the big screen, and their enthusiasm is infectious.

Aimee Teegarden stars as the prom-obsessed senior paired with the school ruffian (Thomas McDonnell in full Judd Nelson mode) after the prom décor gets accidentally torched.The two come from very different worlds, but as they repair the prom accouterments lost in the fire they learn how misleading first impressions can be.

Prom isn't cutting edge or hip. It's just sweet and well told, an irony-free story with overlapping plots that collide in a finale that lives up to its own hype.

The Blu-ray extras include a bloopers reel, deleted scenes and an extended look at the film's most hapless character.

"Last Chance Lloyd" assembles even more scenes of the lanky high schooler (Nicholas Braun) striking out with the ladies. It's funny, and even more wince-inducing than the scenes featured in the theatrical version.

The "Putting on Prom" segment lets the cast and crew reflect on their own prom days, shows us director Joe Nussbaum working with one of those cheesy tuxedo T-shirts, and reveals how McDonnell scored his part. The young actor arrived to his audition wearing motorcycle boots and ripped-up jeans, and the film's crew were instantly impressed.

"You can't kill me. I'm having a dinner party," says the main character in The Perfect Host, a nasty little thriller that's far too imaginative for its own good.

David Hyde Pierce stars as Warwick, a prim, urbane sort preparing to host dinner for some friends. When a bank robber (Clayne Crawford) cons his way into Warwick's home it looks like the party won't be happening as scheduled.

But Warwick quickly turns the tables on his intruder, sparking a cat and mouse contest unlike any we've seen before. And that's the main problem gnawing at Host. The narrative twists, turns and buckles, and each revelation feels less credible than the last. By the final 20 minutes, you're not quite sure what you're watching.

Pierce hasn't had a regular gig since Frasier, and he excels at exuding the stuffed-shirt behavior from his sitcom days as well as a welcome hint of menace. Crawford, a dead ringer for a young Ray Liotta, matches Pierce by giving his character a bruised, open soul.

The home video extras include "The Making of ‘The Perfect Host'" with writer/director Nick Tomnay, plus an HDNet-produced segment on the film's creation.

"Host" began as a black and white short, but Tomnay was able to return to the project a decade later to beef up the story and add a pair of talented actors.

For Pierce, "Host" represents a chance to shatter the audience's preconceived notions of him—but not at first.

"It starts out very much like people are used to seeing me if you saw me on television all those years, and then [Warwick] becomes seriously unhinged," Pierce says in the HDNet featurette.

Tags: In A Better World, Prom, The Perfect Host
Print