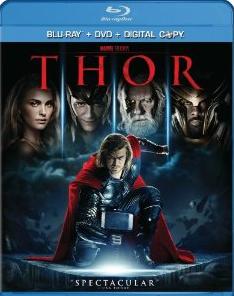 The screen adaptation of the latest Marvel Comics' mainstay comes to life when our hero leaves his enchanted realm for Earth.

Thor casts relative newcomer Chris Hemsworth as the God of Thunder, the hammer-swirling hero cast out of his home when his arrogance re-ignites an old conflict. That opens the door for Thor's brother, Loki (Tom Hiddleston), to create mischief in their Asgard home in Thor's absence. Meanwhile, Thor is stripped of his hammer and sent to Earth where he meets a spunky researcher (Natalie Portman) and her colleagues (Kat Dennings, Stellan Skarsgard).

Thor can't compare to the likes of The Dark Knight or Spider-Man, but director Kenneth Branagh deftly juggles the ludicrous costumes with the requisite superheroic action. Hemsworth and Portman manage some sparks, but the film's final reel relies too much on a romance that isn't fully formed—yet. The sterling supporting cast, including Anthony Hopkins as Thor's pappy, add an extra layer of class to a project that occasionally wallows in superhero silliness.

The Thor limited 3D edition features the Blu-ray 3D, a traditional Blu-ray disc, a DVD version as well as a digital copy. And that's only the beginning, since the package also includes seven featurettes (like a toast to Branaugh and a look at how much research went into the tiniest details regarding Thor's hammer).

In "Road to the Avengers," we get the latest tease about the 2012 superhero super group feature, this time using clips from the past Marvel Comics films as well as brief comments from the project's director, Joss Whedon. Eleven deleted scenes round out the package.

Warner Bros. celebrates the 70th anniversary of Citizen Kane by throwing every conceivable extra into the film's Blu-ray debut.

The best feature of Citizen Kane: The Ultimate Collector's Edition is the loving, frame-by-frame restoration which yields a remarkably fresh Kane for today's audiences. Only the movie's file footage sequences show tell tale signs of aging.

The film, considered in elite film circles to be the finest movie ever made, looks back on the life of Charles Foster Kane (writer/director/star Orson Welles), a newspaper tycoon who wore his opinions on his million-dollar sleeve. Kane opens with the main character's death, but we learn more about his life through the people who knew him best along the way. Welles' filmmaking flourishes were decades ahead of their time, and the film's fractured narrative comes alive under the touch of the then 25-year-old Welles. Even the aging makeup transforming the young star into an older, more weathered mogul is eerily effective.

The saga of a pompous newspaper executive might seem dated in our digital age, but the notion of a media mogul shaping the news to fit his world view certainly mirrors issues news junkies are still debating today.

The Blu-ray package includes more than three hours of bonus content as well as the documentary "Battle Over ‘Citizen Kane'" and the HBO film "RKO 281."

The new Kane also features a small, handsome hardbound book with slick photographs, call sheet reproductions and original artwork produced during the film's creation. It's the kind of comprehensive media presentation Kane himself would admire.

Joseph Gordon-Levitt remains one of the least likely movie stars to emerge out of a hit sitcom. But the 3rd Rock from the Sun regular continues to defy expectations with Hesher, the tale of a grieving father and son who start to heal when a nihilistic metal head bum rushes their lives.

Young T.J. (Devin Brochu) is full of rage following the death of his mother. But at least he's able to function. His father (Rainn Wilson) just lies on the couch in a drug-induced stupor. The two are so disconnected they don't raise an eyebrow when a shirtless slacker named Hesher (Gordon-Levitt) decides to camp out in their home. Hesher has no internal censor, and more often than not he drags T.J. into trouble. But something about Hesher's presence forces the pair to come to grips with their overpowering grief.

Hesher starts strong, as the focus stays mainly on the gifted young Brochu and his travails. But when Natalie Portman arrives on the scene as a sympathetic shoulder for T.J. the film takes a precious turn. And, by the final reel, Hesher feels more like a series of poorly fleshed out plot stunts rather than an unorthodox look at the healing process.

Gordon-Levitt remains compelling despite the narrative hiccups, further proof that some sitcom graduates can leave the canned laughter behind.

The Blu-ray presentation includes deleted scenes, outtakes, a series of Hesher's black and white sketches (not for young viewers) and a standard "Behind the Scenes" featurette. The cast and crew seem unsure just how to describe the title character, although the actor charged with playing him gets the closest to the truth.

"He's more of a mystic fool than a metal head," Gordon-Levitt says

The most novel feature tallies up how many times the film's shoot got interrupted by planes flying overhead. It's easy to picture Hesher flashing his signature hand signal skyward in raw defiance.

We all know late-night czar Conan O‘Brien is a quick wit, but the new documentary about his 2010 comedy tour shows us a comedian addicted to applause.

The new documentary Conan O'Brien Can't Stop reveals its star unwilling to relinquish the stage. As media junkies already now, O'Brien got booted from his Tonight Show gig after only a few months thanks to disappointing ratings and was forced to stay off TV for six months due to contractual obligations.

That made the idea of a comedy tour a reality, and it's here where we see O'Brien in action. He's a sad clown, but not an emotionally damaged one. And while the filmmakers don't pry too closely into O'Brien's life what emerges is a portrait of an artist who needs his fans far more than they need him.

Left unsaid is the colossal pile of money O'Brien walked away with from NBC, an inconvenient fact that makes the pity party much less buoyant.

The home video extras include commentary track with O‘Brien, director Rodman Flender, sidekick Andy Richter, Mike Sweeney and Sona Movsesian, deleted scenes (including the Conan gang riffing on one rather impressive bathtub), and a frustratingly bland interview with the red-headed star. Both the film and the aforementioned Q&A fail to ask enough tough questions of O'Brien, which is a shame since he seems capable of giving fascinating answers if pressed.