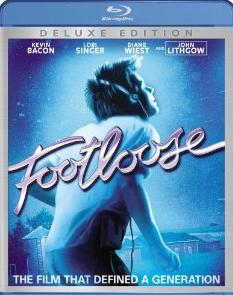 You could quibble that the release of the 1984 smash Footloose on Blu-ray this week smacks of naked synergy. Director Craig Brewer's remake hits theaters Oct. 14, so why not repackage the original on high definition now?

But getting the chance to see star Kevin Bacon's screen test chases away those cynical vibes.

Bacon plays Ren, the new kid in a very small town where the joyous act of dancing has been outlawed. The free-spirited Ren chafes at the ruling even though he's intrigued by the daughter of the Reverend (John Lithgow) who helps enforce the draconian rules.

Bacon shares a combustible sexual energy with co-star Lori Singer, and the film's dance sequences are as invigorating today as they were two-plus decades ago. It's bittersweet to watch the late Chris Penn, cast as the dancing-impaired Willard, blossom before our eyes.

But oh, that soundtrack. For every classic ‘80s tune there's another that should be buried in a time capsule and forgotten. The same holds true for some of the film's more hackneyed scenes, like a game of tractor chicken race which remains laugh out loud funny in all the wrong ways.

The Blu-ray extras include two commentary tracks, a chat with co-star Sarah Jessica Parker, an archive of extras from the 2004 DVD edition and, of course, that fateful screen test.

"The studio was unconvinced I was the guy for the part," Bacon explains in the narration for an extensive, multi-camera screen test complete with a $1,500 haircut and a full range of costume changes. Watching the baby-faced Bacon strut for the unconvinced studio executives makes the Blu-ray edition worth the price tag.

Director Guillermo del Toro is a near God in geek circles today thanks to Pan's Labyrinth and the Hellboy franchise. But back in 1997 del Toro delivered a shocker that didn't fully capture what he meant to bring to the screen.

Mimic: The Director‘s Cut rights that wrong, reminding horror fans of a film which didn't get nearly as much genre love during its initial release. Oscar-winner Mira Sorvino plays a bug expert who squashes an epidemic by fiddling with the city's ecosystem. Before you can say, "it's not nice to fool Mother Nature," a new breed of insect is born, and the New York City subway system becomes its home.

The expanded version lets del Toro's creepy visions take root while showing his adherence to bedrock storytelling principles. It's not a classic, but simply a sharply realized film in a genre that too often settles for mediocrity.

The Blu-ray extras include a video prologue from the director—"you‘ll see the movie that got away"—plus a commentary track with del Toro, deleted scenes, a gag reel and "Back into the Tunnels: Making Mimic."

Steve Martin and John Candy seemed an ideal match in the 1987 comedy Planes, Trains and Automobiles. The comics would never work together again, but the film's Blu-ray release allows us to savor their contrasting comedy styles.

Neal Page (Martin) just wants to get home for the holidays, but the country's mass transit systems won't cooperate. He ends up getting stuck in an airplane seat next to Del Griffith (Candy), an exasperating lug who sells shower curtain rings. The two become reluctant travel mates when one travel system after another buckles under the weight of the holidays.

The film comes with several extras, many spun from a press conference recorded near the time of the film's release featuring Martin, Candy and writer/director John Hughes.

The man behind The Breakfast Club and Pretty in Pink, rocking a serious mullet, seems uncomfortable answering questions and often responds in short, unsatisfying snippets.

The disk comes with one deleted scene, an extended look at Del and Neal's misadventures with airplane food. It's funny to wonder why it didn't merit final cut consideration.

The Canadian thriller "Good Neighbors" is a perfect fit for home viewing. It's unremarkable yet absorbing, filled with appealing actors willing to step a toe or two outside their comfort zones.

Jay Baruchel stars as Victor, a new building tenant who befriends an attractive new neighbor (Emily Hampshire) along with her semi-paralyzed pal Spencer (Scott Speedman). The trio distract themselves with news of a local serial killer, but they're more interested in getting to know each other for wholly different reasons.

The ensuing mystery doesn't require Columbo-style sleuthing, but it's how the characters interact that makes Neighbors such a sly treat. Speedman continues to deconstruct his surfer boy image while Baruchel makes his character far more complex than what the surface tells us. The title itself is a bit of a tease, since even minor characters behave in horrid ways.

The sole extra of note beyond deleted scenes is a short but precise look at the film from HDNet.