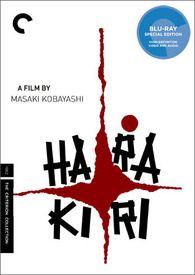 At the heart of Harakiri is an exploration of environmental economy, one that goes beyond a merely corporeal interpretation of the word and conceptualizes circumstance as if it were a physical state.  Of course, the anxious, surveyingly supple frames of director Masaki Kobayashi adroitly caress the architectural impositions of the picture's Edo milieus—most notably the interior textures and ornate rigidity of the house of lyi, the samurai homestead from which the narrative threads unspool—but the story is as vested in where one stands situationally as it is in the agency of physical surroundings.  Kobayashi exercises a mosaicist's hand in conflating these arenas, employing the hallowed innards of the castle as a foundation on which to lay his perceptionally piecemeal narrative.

Harakiri is a work of notable narrative conceit, as its story is bookended by Kobayashi showing its happenings being chronicled in an event log—a gesture meant to evince the story, as we'll eventually learn, with notions of historical censorship, factual perversion, and traditional favorance.  At first this motif reads mostly as innocuous, with the journal's transcription acting as a device that accords the film's temporal slide into the as-stated accounts of May 16th, 1630.  Though beginning as a day of an uneventful if not dogmatic tribute (it's stated that some trout caught within the lyi domain were subsequently presented to the clan as a gift—exciting stuff), the afternoon winds carry with them a suspiciously laconic and expressively distant ronin, Hanshiro Tsugumo (Tatsuya Nakadai).  The samurai wishes to commit the eponymous evisceration within a ritualistically suitable context; that is, the lyi castle is to be, he hopes, but decadent, spiritually acceptable frame for his mortal liberation, his suicidal centerpiece.  But before the honorable final rite can be consummated, those native to this Edo backdrop wish to impart a cautionary tale on Tsugumo, a Hiroshima transplant.  Eliciting a eulogistic tenor for violence—which, of course, is meant as a facetiously corrosive lamentation for the residual terrors bequeathed upon a nation in the shadow of the Second World War—Kageyu Saito (Kageyu Saito) warns the pitiful ronin that a surplus of masterless swordsman have recently infested the area, extorting those occupationally sound by requesting the honor of committing harakiri but balking when offered monetary or vocational compensation.  Master Tsugumo is even regaled, in specific detail, the events of wayward warrior poseur, Motome Chijiiwa (Akira Ishihama), and how the lyi clan cruelly upheld its own honor in making him disembowel himself with but the blunt, bending tip of an—in a world where swords evoke one's soul—emasculatingly impersonal bamboo blade.

The functional heft of this parabolic recitation is far greater than its ostensible shell of exposition suggests, as it also blindly, not to mention expertly, tares the film's moral scale in favor of the tradition sustenance.  To listen to Saito's account, during which he incessantly lobs rhetoric sleights to elide any inkling of the lyi party's misdoing, is to, in a manner analogous to Rashomon, only experience but a glimpse of totality .  As apparent here, Kobayashi is a filmmaker with a grasp of the potential for the emissive fraudulence of storytelling—and by extension art—and he constructs his narrative currents with an insidiously humanistic riptide.  In this, Tsugumo eventually professes a response to the story he's been told, by way of flashback, rhyming the gaps of the lyi delineation with his own perspective-granted details.  (His initial utterance of the eventually-repeated line, "Motome Chijiiwa was a man of some acquaintance to me," leaves the lyi representatives noticeably agasp.)  The force of such reveals, aside from establishing an effective tonal cadence, comes mostly from the subversion of the pre-established, and moreover, the underscoring of a critical burr aimed pointedly at convention.  Effective in any sociocultural deconstruction is the apprehension of how precedent gave way to contemporary conditions; not only does Kobayashi exhibit an understanding of this approach, but he puts it to neat formal use by mirroring the presupposed prestige of still-active samurai groups with the concrete fortitude of unchecked political norms.

Though the feudalistic oppressiveness of a foregone epoch is the main injustice depicted onscreen, Kobayashi's film reads as a slyly acerbic look into the ordinal value bestowed on contemporary citizens due to barriers erected by class stratification.  Tsugumo, in spite of his rare, centrifugal complexity, becomes a totem for the individual's struggle against an unfairly resilient society.  "After all," opines the protagonist, "This thing we call samurai honor is ultimately nothing but a façade."  Kobayashi's presentation seems to align with this hypothesis, but his work also espouses just how crippling of a façade it, and by extension our modern society, is.  Both in our own world and in the filmmaker's vision cinematic, there's a transient nature to change, one that shows the sociocultural organism as a restorative being, an entity all-but immune to parasitic effects of the human self.  Society, in particular the environmental forces akin to its blindly accepted elements, is something that, over time, grows in the way of both fortified institutionalism and personal disconnect.  Kobayashi's picture is almost defeatist, reading as less a call for cultural subversion than as an elegy for individual worth.  Just as Tsugumo's words evince the poetic futility of personal wars, Kobayashi's images impart the erosive effects of both time and cultural scale in communicating the impossibility of uptopianism within the confines our termite existence.

Simply put, this is one of Criterion's more stunning 1960's outputs, with cinematographer Yoshio Miyajima's imagery looking remarkably precise for the entirety of this 1080p presentation.  The backgrounds within some of Kobayashi's more demanding setpieces, though not exhibiting incredible focal depth, display a certain dynamicism between fore-and-background objects, with the picture's chromatic nuance channeling a wholly realized pictorial of its 17th century milieu.  Everything from the extravagant décor of the lyi clan's front gate to the porous, wind-whipped skin seen in unyielding close-ups suggests an attention to restorative detail that is nothing short of stunning.  There's some mild variance in image softness resulting from differences in source prints, sure, but the overall visual feel is one of beauteous uniformity, as Criterion's clinical cleanliness germanely mirrors the lyi clan's own erasure of temporally-derived abrasions.  The Japanese Linear PCM audio track is also an exactingly stable constituent to this impressive Blu-ray release, and the score and effects alike are communicated with wonderfully pronounced clarity.

Accompanying Criterion's excellently immersive transfer is a collective of extras that, while falling a bit short of commensurate, is wholly adequate nonetheless.  Donald Richie's digital introduction elucidates some of the visual metaphors employed by Kobayashi, and also contextualizes the work within both epoch and oeuvre.  I got slightly less out of Masahiro Shinoda's interview with the filmmaker for the Directors Guild of Japan, as the mediator comes across as more than a little tangentially gushing - at least we get to see glimpses of Kobayashi's personality and sense of humor.  The video interviews of star Tatsuya Nakadai and screenwriter Shinobu Hashimoto each allot some perspective to the proceedings, with the former supplying details of the "making of" variety—not to mention a handful of amusing anecdotes that I found more entertaining than revelatory—and the latter commenting on the ideological evolution of the work from script-to-screen-to-reception.  Joan Mellen also does a fine job writing about the picture for the supplemental booklet, though some overlap of edification exists between her essay and her interview with Kobayashi that are housed within.