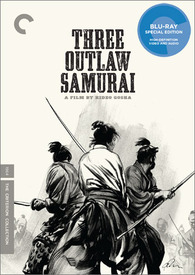 Three Outlaw Samurai is cinema that exists in a world of transition.  Director Hideo Gosha opines some rather cynical worldviews in this, his first filmic output, employing theoretical alterations on the personal, micro level as a way to express the flaccidity of an individual’s effort in changing the macro-whole.  To Gosha, at least in what can be inferred from this vision of austere civil decline, the fabric of feudal systems–or presumably, any socioeconomic asymmetry–evokes something of a universal miniature, as any and all efforts of human influence fail to disturb the collective societal organism.  In less oblique terms, the characters of Three Outlaw Samurai struggle, in vain, to bring change to an inequitable system.  But to change an established cultural model is too large a task for the comparably frail constitutions of the human psyche–the latter bends first under the emotional and ideological force.  Concepts, as posited by Gosha, can present a greater burden than what our mortal shells can sometimes bear, and few in accordance are willing to offer themselves sacrificially for the sake of perpetuating their beliefs; no one wants to fund social transition with a mortal toll.  What’s more, martyrdom becomes increasingly rare in an era where longevity and survival are chief.  The individual, as evinced throughout Gosha’s narrative, can be more than a bit pliable in terms of conviction, a creature that bends when its own wellbeing is put in jeopardy, and threats to one’s comfort, in any realm, can quickly reallocate where loyalties are placed.

This notion of the idea being bigger than the body defines the philosophy behind Three Outlaw Samurai, for characters are presupposed to be mere carriers of certain social sentiments.  Take for instance the title.  At the picture’s opening we’re introduced to a rogue triad that could easily be taken for the eponymous samurai:  they not only meet the numerical criterion, they also fight for justice against a prejudiced economic hierarchy; the many peasants living in such an oppressive caste paradigm suffer at the behest of royal indulgence.  But by the film’s defeatist denouement, the responsibility of this fight has translated to a completely different ternion.  In this, Gosha demonstrates, how theories, especially those of hope, can be inherited in the same vein material can.  Gosha’s picture can thusly be seen as being socialistically driven, if not for its emphasis on proletariat strife then for its coursing utilitarian spirit–the fate of players seems latently karmic, with actions of selfish origin shown in a discriminate light when contrasted with those of more altruistic intent.

Bromidic, however, is the process through which Gosha examines these otherwise worthy overarching themes in way of both narrative and form.  The characters, sans the actual titular trinity, function more as pawns than people, trite symbols of humanity’s moral flexibility in facing their own demise.  Their breakneck changes of affiliation, trading nobility for commodity and vice versa, may support the filmmaker’s stance on the fragility of the flesh, but such decisions seem to be spawned more from caprice than cognition; decisions aren’t the product of any logical process, just that of narrative propulsion.  Much of the picture deals with characters making choices, choices that are of a seemingly insular nature that ultimately reverberate into interpersonal relevance.  And yet this dynamic is never fused to the very societal structures that are inherently up for criticism.  Rather, Gosha presents devolution and civil regression as the byproducts of institutionalized tyranny, using rudimentary visual cues to reflect how his once-proud samurai are now driven by selfish carnality.  Treating humans as animals may beget animalistic humans–which would help explain why characters as well as the film as a whole merely commodify members of the fairer sex–but such mistreatment is only implied through blunt exposition and innuendo.  If only he had the patience to explore this relationship with aplomb, the film’s myriad betrayals might have carried more potency, be it dramatic or intellectual; the tonal cadence probably would’ve been benefitted as well.

The difficulty in critiquing Three Outlaw Samurai, at least in my mind, stems from its awkward admixture of sociopolitical acerbity and knowing genre-centric nods–freckles of humor adorn the contrarily dour cultural veneer.  Gosha tends to handle the more intimate moments of humanity with hints of flippancy, sporadically injecting levity into what some might interpret to be more discrete scenarios.  This, coupled with the hyperbolized graphic and aural punctuations–a focal shift from the dying face of a warrior to a freshly sprouting flower, to name one example, just can’t be intended as sincere–adds an air of satire to the proceedings, though not enough to pass as germane commentary on the samurai cinema tent-pole. Whatever it may be, there’s certainly an element absent in Three Outlaw Samurai, one that stifles its evocative literacy.  Gosha’s first theatrical vision shows glimpses of conceptual profundity, to be sure, but he’s noticeably unrefined in way of impulse control, and much like his characters, sublimational touch.

The impoverished samurai await word from a magistrate, huddled in an aphotic forest weary from famine.  Lit with compositional acuity, the image displays but outlines of the warriors and their wooded environ, delineating an eerie dichromatic portrait that, by way of compression, evokes the area’s spatial complexity.  This is a marquee moment in Three Outlaw Samurai, with the high contrast of its vivid whites and abyssal blacks projecting remarkably stable on this Criterion Blu-ray.  Moreover, this sequence is indicative of the representation’s overall adroitness in handling dark shots and infinitesimal detail – edges, both of swords and other objects alike, are sharp and free of apparent manipulation; they even attribute depth to some frames.  The uncompressed soundtrack is also sturdy and, given the age of the film, rather immaculate in its freedom from distortion.  As a whole, this transfer marks a fine coalescence of cinematic perseveration and representational proficiency, though I find these facets to be more denotative of the Criterion label than the film itself.

Not much doing here.  Outside of an adequately contextualizing if not generously defensive essay by Bilge Ebiri, the release’s only other feature is a token theatrical trailer.  The inclusion of at least one insightful supplement would have been nice, though I understand certain limits exist in restoring films of somewhat rare complexion.