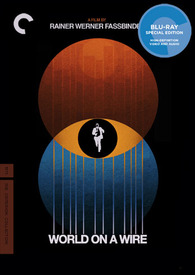 The worlds of Rainer Werner Fassbinder are atypical reflections of reality, slightly eccentric visions in which environmental agency, in all its forms, either machinates or mirrors their inhabitants’ own abnormalities.  Favoring to caress rather than penetrate the internal workings of his characters, the ill-fated director seems more comfortable in exploring–and not in mere aesthetic fashion–the more afferent aspects of human ecology, projecting how his players adapt, sometimes unsuccessfully, to social stimuli from both sides of the liminal threshold.  To be sure, such a reductive statement, on my part, is at once a mindfully vague and ultimately too-constraining a tenet for a man of such prolificacy (over 40 films in 15 years), but the dynamic between character and cultural imposition is something that can be detected both spatially (the intricate framing of The Bitter Tears of Petra von Kant) and existentially (the willful victimization of the protagonist in Fox and His Friends) throughout his oeuvre.  What’s more, his films can also come in the form of latently personal, empathetic entreaties.  In a Year with 13 Moons, to cite a masterful example, is at once a beautiful and tragically forthright essay on, among other things, how a life’s joy is conscribed by others’ cruelty.  More specifically, that particular output shows Fassbinder attempting to put a logical face to the suicide of his lover, Armin Meier–as if there’s catharsis to be found in his lucidly tortured dialectic.

Apropos then is how Fassbinder’s made for television foray into science fiction, World on a Wire, allows the director to channel his nurture-centric worldview into a fittingly augmented take on reality.  Aside from the aesthetic flourishes–which often braid gaudy futurism with the false promise of neon warmth–peripheral players feel as if they’re shown through an eerie sort of sheen, a translucent aura that highlights individual difference, perhaps even in contrast to our own social homogeny.  Regardless, there’s a certain distance that can be felt emanating from each character.  Fassbinder formally plays up such distinctions, as his camera here (aided by cinematographers Michael Ballhaus and Ulrich Prinz) is a device of balletic spatial inquest, often exploring the barriers erected between others and the self.  Interpersonal dynamics are choreographed in a way that underscores artificial intervention within the modern world, for some sort of technological partition, be it a phone or reflective surface, usually acts as a screen dividing the perceptions of characters.  This gesture not only speaks to the illusion of personal realities but also paints existence as something more multi-dimensional than what it’s typically construed to be–in film especially.

These boundaries are obviously not of arbitrary design, and they even seem modeled in congruence to the picture’s broader themes.  Early in the film, Professor Henry Vollmer (Adrian Hoven)–the head of a project that’s essentially a slightly less substantial replication of our own reality, which is in turn used predict our own en masse behavioral patterns–denounces another’s identity by saying, “You’re nothing more than an image others have made of you.”  Such a statement works in a bifold manner, smartly laying the foundation for the film’s sci-fi implications (that reality may, in fact, be illusory) and bringing to light Fassbinder’s fascination with social influence (that we have little control over our sense of self).  These two issues naturally imbricate throughout the picture’s 212-minute running time, but they don’t coalesce wholly.  Rather, the relationship between these elements is ultimately more symbiotic than synthesized, with the pair each complimenting the other but more in way of cursory strokes.  Fassbinder’s main focus seems to be in infusing the environments he creates with veins of these overarching ideas, making gentle allegorical and spoken allusions to the confinement inherent to certain societal structures.  From early in the picture, the filmmaker makes it a point to group characters in a something of a functional sense, categorically painting scientists as stoic idealists and, conversely, capitalists as rationalists–just voracious ones.  The main dramatic current, then, is in watching these two sides leverage for control–which they do, at least by way of human surrogates–a struggle of power that’s relayed to the public through members of the media.  Though a simplification, this societal tripod outlines our entrenched dependence on systemization.  World on a Wire’s overarching sci-fi premise, which will go unspoiled here, accepts this conceit, as the greatest misfortunes within the film seem to befall those guilty not of personal slight, but of challenging accepted social institutions.

Despite a rather familiar, perhaps even flimsy narrative approach, and moreover, a disinterested introspective pose–action and ambiance take precedent over the cognitive processes of characters–Fassbinder laces his film with myriad worthy philosophical inquiries, many relating to the idea of a creator, and by extension, creationism.  Through World on a Wire, he presents reality as something defined by limits, limits beyond which purer, but perhaps less ornamental, truths lie.  “It’s obvious,” begins one digital soul, “What can’t exist doesn’t.”  Fassbinder seems content in positing that worlds are bound by both social constrictions and physical laws alike, and paints these guiding forces in a similarly absolute sense.  But his evocations also leave room for mysticism.  Ambiguity is of constant reference throughout the work, and a somewhat affirming tenor emerges by picture’s end.  It appears that Fassbinder’s implications not only justify, and somewhat hopefully at that, the possibility of a transcendent existence but also how expressive the miniatures we create can be.  That the phrase, “A tiny universe inside our own,” is used to describe the story’s computer-simulated reality is innately telling.  The cinema, and art in general, is our own society’s micro-world, a proportional recreation of our existence that we use to learn about ourselves, our cultural conditions, and especially our lives.  World on a Wire is saturated with this kind of ideological posturing.  Not all of its paranoid projections form complete conceptual circuits, but such loose ends do more to evoke our collective, human uncertainty than something of shoddy craftsmanship.

All things considered, World on a Wire looks sublime on Criterion Blu-ray.  A keen feel for consistency is detected throughout the work, rendering the germanely harsh 16mm visuals within a convincing tonal context.  Texture, though not of particular interest to Fassbinder, is evident and allots the viewing experience a sensorial flair.  But damaged prints are a reality and one of sporadic relevance here.  In consolation, such instances aren’t prominent and it’s not long after experiencing one that we can become lost again in the picture’s disorienting architecture and eerie fluorescent glow.  The transfer, in its quintessence, is stable but flat, evocative but, due to practical limits, not wholly arresting.

Though not a substantial collection of supplements, this Criterion package does include enough elucidatory extras to be recommended–as if the film wasn’t reason enough.  A fifty-minute documentary and a thirty-minute interview sum up the digital special features, while the compulsory booklet offers an essay by Critic Ed Halter.