A certain famous spy will dominate the box office this weekend, while Slumdog Millionaire will try to build momentum.

Bond. James Bond. That's what this weekend is going to be all about.

Quantum of Solace, the 22nd entry into the James Bond franchise, is opening at 3,400 locations this Friday. Solace represents the second time that Daniel Craig is playing Bond. The actor made his debut in 2006's Casino Royale, and that entry boasts the highest domestic haul in the franchise with $167 million. The best Bond opening weekend still belongs to Die Another Day, which brought in $47 million during its opening frame in November 2002. 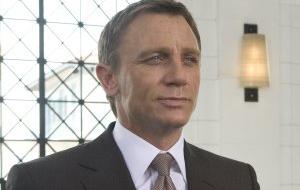 Solace has already made more than $160 million overseas and it's 38 minutes shorter than Royale, which means that theatres will be able to squeeze in more shows. Plus, online ticket sales have been strong for the film. Expect Quantum of Solace to easily snag the best opening weekend ever for a Bond film with around $58 million this weekend.

Madagascar: Escape 2 Africa should do very well after its strong opening weekend, because its been it's been maintaining its audience very well this week (see Tuesday's $9.7 million haul). Expect the animated flick to bring in around $29 million during its sophomore frame.

Slumdog Millionaire (see trailer below) began its platform release on Wednesday, and its performance this weekend will indicate whether or not it will be able to expand its release. Starting out at 10 locations, the critically acclaimed love story from Danny Boyle could bring in as much as $36,000 per engagement this weekend.