BOXOFFICE takes a look at the financial prospects for 15 of the most exciting upcoming releases.

2009 is on pace to be a very strong year. January and February have both delivered their share of hits from Gran Torino to Paul Blart: Mall Cop to Tyler Perry's Madea Goes Jail. Now, as we head into the spring, the slate of films is just as strong as ever.

Next weekend, Watchmen should easily snag 2009's best opening haul to date. The graphic novel's loyal fans will turn out in droves to support the film, and they may even appreciate it more since a legal squabble between Warner Bros. and 20th Century threatened to push back the release date.

While it will almost certainly post strong opening weekend numbers, Watchmen 's staying power at the box office is definitely a concern. It may be difficult for such a long (it runs two hours and 42 minutes), meditative and somber superhero movie to bring in repeat business outside of dedicated fans. Although, Watchmen defenders may point to the The Dark Knight, which was able to be long, meditative and somber while also managing to rake in more than its share of box office receipts. Yet Watchmen is rated R, and its March release date is not nearly as strong as Knight 's July 18 unveiling.

After the recent success of Kung Fu Panda and Madagascar: Escape 2 Africa, Monsters vs. Aliens promises to be another hit for the DreamWorks Animation team. While they may often lose the Best Animated Feature Oscar to Pixar, DreamWorks Animation has still been able to comparitive box office numbers to their competitor. MvA boasts a solid voice cast that includes Reese Witherspoon, Stephen Colbert, Kiefer Sutherland and Paul Rudd, which will help it appeal to older, hipper audiences as well.

Universal's Fast & Furious is also on track to post very solid numbers when it opens during the first weekend of April. Fans of the film are showing their interest online in a big way. F&F 's official Facebook page already has nearly 235,000 fans, which is considerably more than Watchmen 's nearly 190,000. The reunion of Vin Diesel and Paul Walker will entice audiences to return after a mediocre string of sequels.

Below, you'll find B OXOFFICE.com's financial predictions for some of the most anticipated new films this spring. Check back next Saturday when we'll add X-Men Origins: Wolverine to the list. 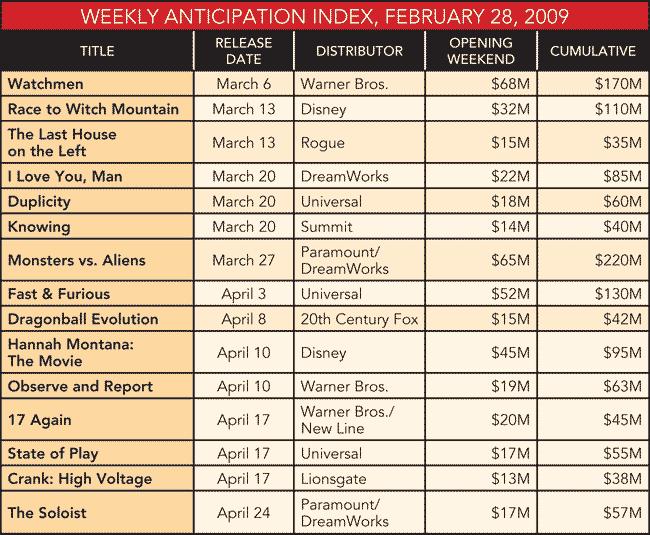