UPDATED: Weekend Predictions: ' I Love You, Man,' 'Knowing' and 'Duplicity' 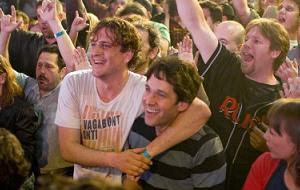 It's going to be a battle between the rising stars and the falling stars at the box office this weekend.

Paul Rudd and Jason Segel headline I Love You, Man, the latest "bromantic" comedy to hit theatres. Both Rudd and Segel had a huge year in 2008, which helped catapult them from supporting players to valid leading men. Rudd teamed with Sean William Scott and director David Wain for Role Models, which grossed an impressive $67 million domestically despite being in theatres at the same time as such juggernauts as Quantum of Solace, Bolt, Madagascar: Escape 2 Africa and Twilight. Earlier in the year, Segel's Forgetting Sarah Marshall brought in $63.2 million, which made it one of the sleeper hits of Spring 2008. Expect Man to easily grab the top spot at the box office this weekend.

Out of all the new wide releases this weekend, Knowing is slated to open at the most locations. Still, Nicolas Cage's box office clout is certainly slipping. Take away the safety of Disney's National Treasure franchise and as well as the built-in audience of Ghost Rider and his films have not been performing well at all. 2008's Bangkok Dangerous landed with a thud last September before wrapping its domestic theatrical run with $15 million. Other recent Cage duds include 2007's Next which grossed $18.2 million ($19 million when adjusted for inflation) and 2006's The Wicker Man which raked in $23.7 million ($26 million when adjusted for inflation). Although, Knowing is rated PG-13, which means that it could appeal to teenage audiences that are not old enough to catch Man. Summit has given the film a strong marketing blitz, and its recent television spots have revealed some different elements of the story. Knowing could provide a Cage a much needed boost and it should land in second place without too much trouble.

Universal's Duplicity boasts a star paring of Julia Roberts and Clive Owen, which means that will appeal to adult audiences that aren't interested in the juvenile humor of Man. While many industry prognosticators are questioning whether or not Julia Roberts is still a box office draw, that doubt may be premature. Her last film appearance was in Charlie Wilson's War, which grossed a relatively solid $66.7 million domestically. If her fans rush out to see Duplicity during its opening weekend, then it could post surprisingly strong numbers.

Disney's Race to Witch Mountain should deliver respectable numbers during its second frame. Mountain still represents the newest choice for family audiences and it should lose less than 40% of its patrons from last weekend. The sci-fi flick will need to grab all the cash it can this weekend before Monsters vs. Aliens steals its audience away next weekend.