From a thriller about a stalker to a nature documentary, this weekend is shaping up to be very interesting. 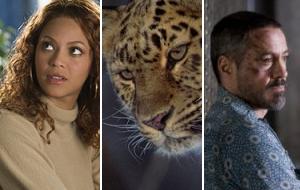 Even though this weekend probably won't bring any new blockbusters, moviegoers will have a diverse set of new options to chose from.

Screen Gems has given Obsessed a solid marketing blitz. The thriller stars Beyoncé Knowles and Ali Larter and it should appeal mostly to female audiences. While both actresses are far from major box office draws they are certainly recognizable enough to compel audiences to take a chance on the flick.

Obsessed could be one of the first films to help Knowles carry projects based on her name. Her presence in such hits as Austin Powers in Goldmember, The Pink Panther and Dreamgirls is certainly not the main reason that those established properties succeeded at the box office. Last year, Knowles was featured more prominently in the ad campaign for Cadillac Records, which grossed a paltry $8.2 million.

Earth opened yesterday with a solid $4 million gross, which bodes well for its performance this weekend. 2005's March of the Penguins proved that there is definitely a market for nature docs after it grossed an impressive $77.4 million domestically ($86.7 million when adjusted for inflation). As of 4 p.m. PT on Thursday, Earth represented a solid 30% of this week's sales on Fandango.com, which puts it well ahead of all other new releases this weekend.

Scathing reviews have made it clear why DreamWorks/Paramount pushed The Soloist 's release date from last November to this coming weekend. The film will be playing at around 1,800 locations, which is a very unenthusiastic release considering that it boasts the star presence of Robert Downey Jr. and Jamie Foxx. Art house audiences and adult crowds that normally would have given the film shot may be turned off by the negative buzz.

Key male demographics may be enticed by Fighting this weekend. Just as Obsessed represents a box office test for Knowles, Fighting will determine whether or not star Channing Tatum can open a film. The actor is poised to have a big summer thanks to supporting roles in Public Enemies and G.I. Joe: Rise of the Cobra, so Fighting could mark the beginning of some serious momentum.