A rising teen sensation will go up against two experienced stars at the box office this weekend. 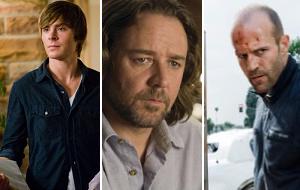 After gaining some serious attention from moviegoers thanks to 2007's Hairspray and High School Musical 3: Senior Year, Zac Efron will try to move to the top of the box office again with 17 Again. It won't be easy, because the budding star will have to face off against new films from Russell Crowe and Jason Statham.

17 Again will be a defining film for Efron. The success of Hairspray and HSM3 can hardly be attributed entirely to him considering that both films are part of established properties and they also boasted strong ensemble casts. Hairspray opened with an impressive $27.5 million ($28.7 million when adjusted for inflation) before raking in a total domestic haul of $118.8 million. Meanwhile, HSM3 debuted with $42 million before ending up with $90.6 million domestically.

Even though Hannah Montana: The Movie will probably lose as much as 60% of its audience during its second frame, its presence will still hurt 17 Again 's bottom line since both films will be relying heavily on teenage audiences.

Early online sales for 17 Again haven't been anything special. As of 4 p.m. PT on Thursday, the Zac Efron flick was responsible for 19% of overall sales on Fandango.com. Meanwhile, on MovieTickets.com, the film accounted for only 8% of sales as of 9 a.m. PT, trailing Hannah Montana: The Movie, Monsters vs. Aliens and Fast & Furious.

Thanks to an impressive ensemble cast, State of Play will be able to do respectable, but not overwhelming, business this weekend. Play star Russell Crowe is hit and miss at the box office these days. While 2007's American Gangster opened with a staggering $43.6 million ($45 million adjusted), 2008's Body of Lies landed with a disappointing $12.8 million opening weekend despite also boasting the star power of Leonardo DiCaprio.

Over the past several years, Jason Statham has built a solid following for himself. However, he's yet to have breakout film as a leading man, and Crank: High Voltage won't be it. Statham starred in three 2008 releases: Transporter 3, Death Race and The Bank Job. Both Transporter 3 and Death Race opened in the $12 million range, while Job opened to just under $6 million. The original Crank opened to the tune of $10.5 million in 2006, which translates to $11.5 million when adjusted for inflation. Lionsgate's marketing blitz for High Voltage has been strong, so Statham may build up his audience slightly this time around.