Star Trek will propel the summer movie season forward, while Next Day Air will try to find a niche. 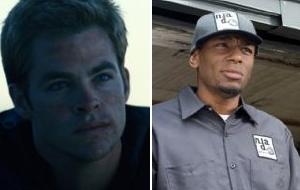 The month of May is full of blockbusters, and this weekend it is Star Trek 's turn to try and become one of the summer's biggest hits.

The key to Trek 's success will be whether or not it can successfully convert a new generation of moviegoers into Trekkies. A recent poll of nearly 6,000 moviegoers on MovieTickets.com reveled that 32% had never seen a Trek film. Paramount's marketing blitz for Trek has a very fresh, edgy feel to it, and the studio isn't exactly pandering to the die-hard enthusiasts.

Online ticket sales for Trek are solid , and Fandango is reporting that the franchise reboot is outpacing X-Men Origins: Wolverine at the same point in the sales cycle.

The fact that Trek is playing at theatres across the country starting at 7 p.m. on Thursday will mean that its Friday-Sunday numbers won't be quite as strong. After all, there is no way that Trekkies will wait until Friday. Paramount is probably banking on the idea that the early screenings could help build positive buzz, which means moviegoers who are unfamiliar with the property could feel more enticed to give the sci-fi flick a chance.

The debut of Trek will certainly slow the momentum of Wolverine. If it didn't have to compete with Trek, Wolverine probably could have maintained more than half of its audience from last weekend. With said competition, it's likely that the latest entry into the X-Men franchise will drop 60% or more from its debut haul.

Summit's Next Day Air, a comedy starring Mos Def, Mike Epps and Donald Faison, will have to struggle to find an audience in the shadow of Trek and Wolverine. Air will land in 1,138 locations, which is another factor that will limit its box office haul.