Ice Age 3 and Public Enemies are both off to a great start based on opening day figures. 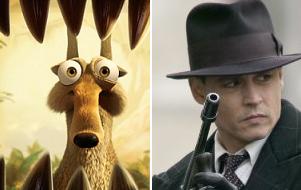 As of 2 p.m. PT on Thursday, Fandango.com is reporting that Ice Age 3 is responsible for 28 percent of daily sales, while Public Enemies boasts a respectable 18 percent. Transformers: Revenge of the Fallen is not far behind with 16 percent, and there's still a decent chance that Michael Bay's extravaganza could claim the #1 spot again over the Friday to Sunday period.

"I think it has a very good shot," says Larry Collins, vice president of film with Carmike Cinemas when asked about a potential Transformers 2 repeat. "But in my own personal opinion I think Ice Age is going to take it."

The biggest obstacle for all films this weekend will be the fact that the 4th of July holiday falls on a Saturday.

"Usually a holiday falling like that hurts," says Jeremy Devine, vice president of marketing with Rave Motion Pictures. "But July can be the exception, because you really begin to see every day become like a holiday. Is it ideal? No. Does it worry me? Not particularly. I think theaters have a chance, based on the varied product, to just be firing on all cylinders for the next ten days or so."


Thursday Morning Update (6:33 a.m. PT): Variety is reporting that based on early estimates Ice Age: Dawn of the Dinosaurs grabbed $14 million on its opening day, and Public Enemies made $8 million.

Check back often for more details.

Wednesday Afternoon Update (12:50 p.m. PT): As of Noon PT, Fandango.com is reporting that Ice Age: Dawn of the Dinosaurs is responsible for 46% of daily sales, while Public Enemies represents 21 percent of sales. Transformers: Revenge of the Fallen currently boasts 9 percent.

Wednesday Morning Update (11:50 a.m. PT): 20th Century Fox's established animated franchise will face off against Universal's group of cops and robbers over the July 4th weekend. As both Ice Age: Dawn of the Dinosaurs and Public Enemies attempt to record solid debuts, DreamWorks/Paramount's Transformers: Revenge of the Fallen will try to keep up the momentum from its impressive opening. Unfortunately, the fact that the 4th of July falls on a Saturday this year may hurt all parties involved.

As of 10 a.m. PT, Fandango.com is reporting that Ice Age: Dawn of the Dinosaurs is responsible for a healthy 58 percent of daily sales, while Public Enemies represents 15 percent and Transformers 2 boasts 10 percent. According to MovieTickets.com, as of 9 a.m. PT Ice Age 3 leads daily sales with 48 percent, while Enemies trails with 18 percent and Transformers 2 has 13 percent.

While it certainly seems that Ice Age 3 will win the weekend, Transformers 2 may not be far behind and it could very well stay on top of the box office. Meanwhile, an R rating will keep Public Enemies from competing too closely with the more commercially accessible flicks.

While mainstream audiences may find his films too contemplative and dry, the presence of Johnny Depp and Christian Bale practically guarantees that director Michael Mann's latest flick will open with solid numbers. Universal needs Enemies to be a hit, and so does Mann. The studio has had a tough time over the last couple of months due to the weak performances of State of Play and Land of the Lost. As for Mann, his box office hauls aren't necessarily justifying the $100 million budgets he has been given recently. 2006's Miami Vice reportedly brought in $162 million worldwide, but considering that its production budget was estimated to be as much as $135 million it probably fell well short of being profitable after advertising costs were factored in. Expect Enemies to grab as much as $36 million from Friday to Sunday and around $55 million over the five-day period.

Considering that Transformers 2 reached the $200 million plateau faster than any other film except The Dark Knight, it is already a success. Whether or not audiences are interested in a second viewing will determine just how much of a success it becomes. The bloated length of the film may hurt it slightly when moviegoers debate another helping. Then again, Michael Bay's extravaganza should still play very well this weekend among teenage audiences who are too old for Ice Age 3 and too young for Enemies. It's a safe bet that film will be very close to the $300 million mark by Sunday, if it doesn't actually hit it, which means that it will have reached the impressive plateau in only 12 days. It took Dark Knight only 10 days.

Check back tomorrow for opening day numbers and our top 10 weekend predictions.