District 9 has topped G.I. Joe at the box office this weekend. The Time Traveler's Wife finished in third. 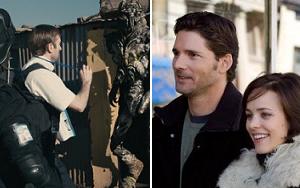 Saturday Morning Update (9:45 a.m. PT): According to B OXOFFICE.com’s Early Weekend Estimates, District 9 is on pace to win the weekend with $35 million. G.I. Joe will fall to second place with $23 million, while The Time Traveler’s Wife will open in third with roughly $20 million. Click here for the full report.

Thursday Afternoon Update (3:18 p.m. PT): Even though it's a very crowded weekend, District 9 should easily emerge victorious during its debut frame. The sci-fi pic will prove, much like The Hangover did earlier this summer, that big stars and/or an established aren't needed for a strong box office performance.

G.I. Joe: The Rise of Cobra should hold up relatively well during its sophomore frame. The Paramount/Hasbro collaboration has already grossed more than $100 million worldwide, according to Rentrak.

While it's going to have to compete with Julie & Julia 's holdover business, The Time Traveler's Wife will be able to easily capture the attention of adult audiences who aren't into the sci-fi action of D9.

Thursday Morning Update (9:30 a.m. PT): As of 8 a.m. PT, Fandango.com is reporting that District 9 is responsible for an impressive 29% of sales. Meanwhile, The Time Traveler's Wife represents 14%. Disney's Ponyo is also starting to have an impact with 5%.

Wednesday Afternoon Update: So much for August being a dumping ground.

This weekend, moviegoers will have plenty to chose from at their local multiplexes. Whether it's a story about captive aliens, a romance featuring a time-traveling love interest or a comedy about a car salesman, there are more than enough options. In addition, High School Musical 's Vanessa Hudgens will try to carry Bandslam to success and Disney is hoping that American audiences will embrace Japanese animation master Hayao Miyazaki's Ponyo.

District 9 has emerged as the favorite to win the weekend, and it will be opening at around 2,900 locations. With its strong, unconventional marketing blitz and the promise of providing intelligent sci-fi for adult audiences, D9 should be able to grab a healthy fraction of the audience that made Star Trek a hit earlier this summer.

As of 3 p.m. PT, D9 was responsible for an impressive 15% of daily sales on Fandango.com, which represents a pleasant surprise since the film is not based on an established property like so many other summer blockbusters.

“It’s encouraging to see a foreign-made R-rated indie with no box office stars selling this well in advance”, says Rick Butler, Chief Operating Officer for Fandango. “It appears to be a result of the great word of mouth that started at the Comic-Con screening, followed by subsequent release of new and intriguing trailers and clips on the web.”

If D9 received a PG-13 rating, then its prospects for the weekend would look even more promising. As it stands, younger audiences who found the trailers enticing won't be able to get in and they may instead choose to see G.I. Joe: The Rise of Cobra again. Expect D9 to grab around $29 million during its debut frame.

" District 9 is the top overall pick this weekend in the Flixster community, but it is interesting to see how strongly divided male and female moviegoers appear to be this weekend," says John Singh, a spokesperson for Flixster. "Where females want to see The Time Traveler’s Wife, men are interested in District 9, and there is not a lot of crossover. District 9 is certainly gaining strength, and hitting its mark with its core audience."

Julie & Julia proved last weekend that there is definitely an audience out there for a film released during the summer months that doesn't feature explosions, car chases and fight scenes. Now, The Time Traveler's Wife, which opens at more than 2,700 locations, will try to tap into that same audience. TTTW comes with a built-in audience thanks to its best-selling source novel, yet even if it wasn't an established property the Eric Bana/Rachel McAdams vehicle would still represent a perfect date option for moviegoers.

As of 3 p.m. PT, TTTW accounted for a respectable 6% of daily sales on Fandango.com. That number should increase as the weekend grows closer. TTTW may finish with about $22 million during its opening weekend.

Jeremy Piven will try to parlay his success on HBO's Entourage to movie theaters with The Goods: Live Hard, Sell Hard. Goods is set to open at only around 1,500 locations and that will certainly keep it from topping D9 or TTTW. The Hangover proved that there is always a market for R-rated comedies, and if Goods, which features Hangover star Ed Helms, can capture even a small amount of Hangover 's audience it will be a hit. Goods should be able to debut with around $9.5 million this weekend.

Summit's Bandslam will represent a viable option for families. Star Vanessa Hudgens certainly won't be able to help the film match the success of the High School Musical series, but the young actress has certainly earned some trust among HSM 's fans. Bandslam could grab a modest $7 million during its opening weekend.

Even though American stars such as Matt Damon and Tina Fey have provided their voices to Ponyo, the film will appeal to animation enthusiasts more than it will family audiences. Expect Ponyo, which lands at around 800 locations, to open with around $2.5 million this weekend.

As for G.I. Joe: The Rise of Cobra, the Paramount release should finish in second place during its sophomore frame.