This September, Fame and Surrogates will try to make their mark at the box office. 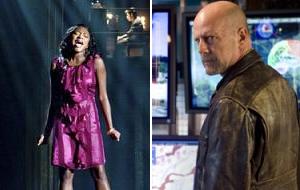 This week, we've added two new films to our Anticipation Index. Fame and Surrogates are both set to open on September 25.

With one glance at the box office grosses for recent musicals such as Mamma Mia! —$601 million worldwide—and High School Musical 3: Senior Year —$250 million worldwide—it becomes quite clear that the genre is alive and well. While there is bound to be a musical that disappoints at the box office in the near future, Fame probably won't be the one. Considering that it's a remake, the MGM/UA release already comes with a well-established audience. Fame should post strong numbers during the slow months of September and October.

Surrogates star Bruce Willis is certainly not the box office draw that he once was. His last major hit came thanks to the fact that he returned for a fourth installment of the Die Hard franchise. Other than that, he's had one underwhelming opening after another. 2006's 16 Blocks started its domestic run with $11.9 million, while 2007's Perfect Stranger was able to debut with only $11.2 million. The fact that it has a promising, high-concept sci-fi premise may help Surrogates before slightly better than Blocks and Stranger.

Check out our predictions for these two new films as well as other upcoming releases in the table below.