UPDATED: Weekend Estimates: 'Tyler Perry's I Can Do Bad All by Myself,' 'Whiteout' and 'Sorority Row' 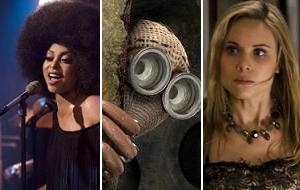 Sunday Morning Update (9:25 a.m. PT): As expected, Tyler Perry's I Can Do Bad All by Myself finished in first place this weekend. 9 finished in a distant second, while Sorority Row and Whiteout finished in sixth and seventh place, respectively. Click here for the full report.

Saturday Morning Update (9:24 a.m. PT): Tyler Perry's I Can Do Bad All by Myself will be the box office champion this weekend. 9 is set to finish in second place. For the full report, click here .

Thursday Afternoon Update (3:51 p.m. PT): As expected, Tyler Perry's I Can Do Bad All by Myself experienced a surge in online sales on Thursday. As of 3:45 p.m. PT, the Lionsgate release was responsible for 24 percent of daily sales. Perry's flick is also opening at slightly more locations than expected.

9 accounted for eight percent of daily sales. The Focus release made a respectable $3.1 million on its first day of release, and it will now need positive word of mouth to help it standout during a particularly crowded weekend.

Check out our final Top 10 weekend predictions in the table below.


Wednesday Afternoon Update (4:15 p.m. PT): This weekend, four new films will be hitting theaters in wide release. 9, which opened today, Tyler Perry's I Can Do Bad All by Myself and Sorority Row should all manage to find a respectable audience during their debut frames. Whiteout, the fourth wide release, is playing at the most locations even though it has received a mediocre marketing blitz. The Warner Bros. release will have a tough time distinguishing itself among the other newcomers.

I Can Do Bad All by Myself is easily the favorite to win the weekend, thanks in no small part to the fact that creator Tyler Perry is coming off of the biggest box office success of his career. This past February, Madea Goes to Jail debuted with an impressive $41 million on its way to a $90.5 million domestic cume. Perry's strongest opening before that was 2006's Madea's Family Reunion, which grabbed $30 million during its debut frame. The multihyphenate has built a strong, loyal audience for himself, and there's no reason to expect that said audience won't come out to support his latest venture.

As of 4 p.m. PT, Fandango.com is reporting that Bad All by Myself is responsible for a respectable 15% of daily sales. That number is bound to increase as the weekend draws near.

The fact that Perry's latest flick is entering a crowded marketplace will hurt it slightly, but not enough to hinder what's bound to be a successful weekend. Expect Bad All by Myself to rake in $32.5 million from around 2,100 locations this weekend.

Depending on how it fairs on Wednesday and Thursday, the weekend prediction for 9 could fluctuate. The animated flick will certainly be hindered by the fact that with 1,652 locations it represents the smallest of the four wide releases this weekend. 9 's trailers have also been slightly dark, and it's PG-13 rating may keep away families with young children who would normally have flocked to anything animated. Still, with Tim Burton's name attached to it 9 will be able to find its niche.

The Focus release was responsible for 42% of daily sales on Fandango.com as of 4 p.m. PT, and that number may fall to make room for Bad All by Myself as Friday nears. 9 could bank a modest $12 million from Friday to Sunday.

Considering that The Final Destination is bound to suffer a sizable drop this weekend after finishing on top of the box office two weekends in a row, Sorority Row may be able to grab the attention of horror enthusiasts. Summit has been pushing Row pretty hard, and with around 2,500 locations it will be the second-widest release of the weekend. Still, since it doesn't come from established franchises the way that recent horror hits such as TFD and Friday the 13th did, Row may start off a little slower. Expect the fright fest to grab a debut haul of around $11.5 million.

As for Whiteout, expectations are low considering that star Kate Beckinsale hasn't established much box office clout outside of the Underworld franchise. The thriller could earn about $7 million during its opening frame.

Check back tomorrow for out top 10 weekend predictions as well as official location counts.