UPDATED: Weekend Estimates: 'Fame,' 'Surrogates' and 'Cloudy with a Chance of Meatballs'

A musical remake and a new Bruce Willis flick didn't take the top spot away from Cloudy with a Chance of Meatballs. 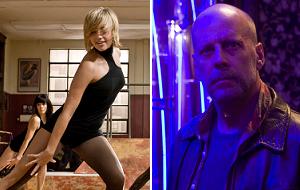 Sunday Morning Update (9:00 a.m. PT): As expected, Cloudy with a Chance of Meatballs finished way ahead of the pack this weekend. Meanwhile Surrogates landed in second, and Fame opened in third. Click here to read the full report.

Saturday Morning Update (8:28 a.m. PT): Cloudy with a Chance of Meatballs is headed for a second weekend on top of the box office. Surrogates will finish in second, while Fame will land in third. Click here for the full report.

Thursday Afternoon Update (5:02 p.m. PT): While the world of online ticket sales is still being dominated by The Twilight Saga: New Moon, this weekend's new releases experienced a surge in sales today.

As of 4 p.m. PT, Fandango.com is reporting that Fame is responsible for 12 percent of daily sales, and Surrogates grabbed five percent. Cloudy with a Chance of Meatballs may be able to repeat as #1 during its sophomore frame, and it raked in 10 percent of sales as of 4 p.m. PT. New Moon led the way with 42 percent.


Wednesday Afternoon Update (5:12 p.m. PT): This weekend, Fame and Surrogates are the two wide releases with the best shot at dethroning Cloudy with a Chance of Meatballs at the box office. Meanwhile, Pandorum will try to find an audience among sci-fi enthusiasts.

Based on the recent box office performance of Hairspray and Mamma Mia!, the musical is obviously alive and well. Fame is certainly a recognizable muscial property and with the help of a fresh, young cast it should post very solid numbers this weekend. Still, Cloudy with a Chance of Meatballs will hold up very well during its sophomore frame since there is a lack of entertainment for family audiences. That means Fame and Cloudy should end up within close range of each other.

As of 5 p.m. PT, Fandango.com is reporting that Fame is responsible for a modest five percent of daily sales, and its the only film hitting theaters this weekend to make a significant dent on the ticketing site. Even though it doesn't hit theaters until November, New Moon was responsible for 44 percent of sales at 5 p.m. PT. Even with the popularity of New Moon looming over it, Fame 's sales percentage should increase as the weekend draws near.

Opening at around 3,000 locations, Fame is the widest new release of the weekend, and it should end up with around $19 million in the bank during its debut frame.

With the exception of Live Free and Die Hard, Bruce Willis has been losing his drawing power in leading roles over the last several years. Perfect Stranger, 16 Blocks, Lucky Number Slevin and Hostage all failed to open with more than $15 million.

Surrogates will probably fair slightly better thanks to an aggressive marketing campaign and a promising high-concept premise. Expect the Disney release to grab around $14 million during its debut frame from more than 2,700 locations.

Pandorum, which is opening at around 2,400 locations, will be hurt by the fact that it's gunning for the same sci-fi-loving audience as Surrogates. Still, Overture has given the film a respectable marketing campaign and it should be able to carve out a decent niche. Expect Pandorum to capture around $6 million during its first weekend of release.

Michael Moore's Capitalism: A Love Story began its run today at four locations, and it should post an extremely healthy location average before it eventually expands to more venues.

Also not to be ignored this weekend is I Hope They Serve Beer Hell, which is based on the best-selling novel full of promiscuity and drunken debauchery by Tucker Max. Beer in Hell is debuting at 115 locations, and it could end up scooping up at least a small portion of the same audience that made The Hangover a massive hit this past summer.

Check back tomorrow for our full Top 10 predictions as well as official location counts.