Weekly Anticipation Index: 'Michael Jackson's This Is It' and 'Youth in Revolt'

We take a closer look at the immense box office potential that Michael Jackson's This Is It possesses. . 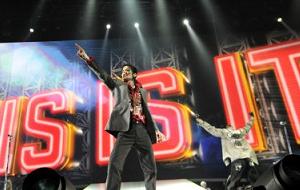 This weekend, we've added Michael Jackson's This Is It and Youth in Revolt to our Anticipation Index.

This Is It is easily the wild card of the fall slate. Even though it is only scheduled for a two-week engagement, the film could easily play well into November if the box office numbers are healthy enough and Sony decides to extend the run. There is going to be a huge curiosity factor that will drive audiences to theaters, and die-hard fans may want to catch the film more than once. The only potential danger for This Is It is the fact that Jackson's death has already been covered extensively on television. There is is bound to be at least a small population of moviegoers who are simply sick of hearing about him at this point.

Youth in Revolt opens two days after This Is It and it has little chance of escaping the concert film's shadow. Revolt will represent a major test of Cera's drawing power, since he is being used as a major selling point. The young actor is need of a hit after the underwhelming performance of Year One this summer.

Check out our predictions for both of these films as well as others in the table below.