Zombieland and Toy Story/Toy Story 2 in 3D are both on pace for strong grosses this weekend. 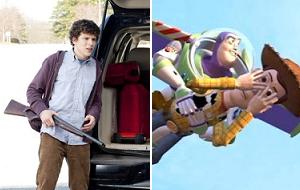 Thursday Afternoon Update (4:51 p.m. PT): As of 4 p.m. PT, Fandango.com is reporting that Toy Story/Toy Story 2 in 3D is responsible for 15 percent of sales, while Zombieland is close behind with 14 percent of sales.

On MovieTickets.com, Zombieland failed to crack the top 5 as of 4 p.m. PT. Toy Story/Toy Story 2 in 3D was able to grab eight percent of sales.

Both sites are still being dominated by Michael Jackson's This Is It and The Twilight Saga: New Moon.

Check out our final Top 10 predictions for this weekend in the table below.


Wednesday Afternoon Update: Moviegoers will have plenty of options at the local multiplex this weekend thanks to a rush of material. Zombieland, Toy Story/Toy Story 2 in 3D, The Invention of Lying and Whip It are all opening wide, while Capitalism: A Love Story is expanding to around 1,000 locations.

Zombieland is the early favorite to claim the top spot at the box office. Sony has given the zombie comedy a powerful marketing push and after two weeks of dominance by Cloudy with a Chance of Meatballs the market is wide open for an R-rated flick.

Zombieland, which is opening at more than 2,900 locations, has yet to make a significant dent in the world of online sales, but that should change as the weekend draws near. As of 4 p.m. PT, the film was responsible for three percent of Wednesday's sales on Fandango.com and one percent on MovieTickets.com. Both ticketing sites are currently being dominated by Michael Jackson's This Is It and The Twilight Saga: New Moon.

Zombieland could earn around $17 million during its debut frame, which should allow it to dethrone Cloudy.

Disney will be releasing Toy Story and Toy Story 2 in 3D to around 1,600 locations. While a duration of over three hours will hurt the amount of showings that theaters can schedule, the added price of 3D content will help make up for that at the box office.

Fans of the classic animated flicks are snatching up their tickets early. The double-feature landed 12 percent of sales at Fandango.com as of 4 p.m. PT, and five percent on MovieTickets.com.

Expect Toy Story/Toy Story 2 in 3D to rake in around $12 million this weekend.

Drew Barrymore makes her directorial debut with Whip It, a Fox Searchlight release that is starting its theatrical run at 2,100 locations. While star Ellen Page is far from a major box office draw, Whip It should find a decent following among female moviegoers. The rollerblading flick could make around $9 million this weekend.

Ricky Gervais will try to build his following with The Invention of Lying, and he's got the help of an all-star cast that includes Jennifer Garner and Tina Fey. Unfortunately, Lying will probably get bogged down by the crowded marketplace and it may manage only $7.5 million during its debut frame.

Michael Moore's Capitalism: A Love Story has already grossed nearly $400,000 since opening at four locations last weekend. The controversial director's latest project should be able to bring in around $7 million as it expands to a wide release this weekend.

A Serious Man is opening at six locations and it should grab a five-figure location average. More Than a Game, the documentary about LeBron James' high school basketball team, should also do quite well at 14 locations.