Weekly Anticipation Index: 'Alvin and the Chipmunks: The Squeakquel,' 'It's Complicated,' 'Sherlock Holmes,' 'Nine' and 'Up in the Air'

Alvin and the Chipmunks: The Squeakqual is just one of the strong releases due out near the end of December. 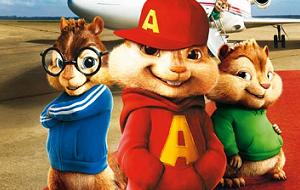 This weekend, we are adding five new films to the Anticipation Index. Alvin and the Chipmunks: The Squeakqual, It's Complicated and Sherlock Holmes are all debuting wide on December 25, while Nine and Up in the Air will expand after opening in limited release.

20th Century Fox's Alvin and the Chipmunks: The Squeakqual is easily the favorite to win over the crowded holiday weekend. The original film brought in a staggering $217.3 million in 2007, making it one of the year's surprise hits. The new installment should be able to improve upon that number considering that it has added the Chipette characters, three girl chipmunks who will give the film more of an appeal among young female audiences.

Robert Downey Jr. lends his new-found clout to Sherlock Holmes. While Holmes won't bring in Iron Man -level numbers, it will be able to succeed due to a familiarity audiences will feel even if they haven't read Sir Arthur Conan Doyle's original novels.

It's Complicated boasts the deadlypotent triple team of Meryl Streep, Steve Martin and Alec Baldwin. Adult audiences will take their children to see The Squeakual during the day before catching this Universal release at night.

The success of Nine and Up in the Air depends in large part upon how well they are reviewed as well as how much awards recognition they receive. Up in the Air has already won glowing reviews on the festival circuit, which means that it's almost guaranteed a spot among the 10 Best Picture nominees at this point. Nine 's cast is easily one of the most impressive of the fall. Daniel Day-Lewis is backed up by an all-star female ensemble filled with the likes of Nicole Kidman, Kate Hudson and even Sophia Loren. There are enough talented actresses in Nine to fill the entire Best Supporting Actress category, so nominations are imminent.