A film about mass destruction and an indie flick about champions of free speech opened with mixed results. 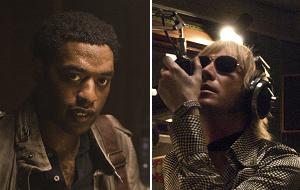 Saturday Morning Update (8:41 a.m. PT): As expected, 2012 is posting incredibly strong numbers. The Sony release has a shot at making more than $60 million during its debut frame. Precious: Based on the Novel "Push" by Sapphire is also doing very well in limited release. The Lionsgate flick is on pace to boast a location average of more than $30,000 this weekend. Click here for the full report

Thursday Afternoon Update (3:23 p.m. PT): As of 3 p.m. PT, Fandango.com is reporting that 2012 is responsible for 14 percent of daily sales, while MovieTickets.com is reporting nine percent.

Not surprisingly, Precious: Based on the Novel "Push" by Sapphire has made a dent in the world of online sales. The Lionsgate release is responsible for four percent of daily sales on Fandango as of 3 p.m. PT, and two percent on MovieTickets.

Disney's A Christmas Carol has shown strong staying power this week, so we've bolstered our weekend prediction a bit as the 3D flick heads into its sophomore frame.

Wednesday Afternoon Update (5:32 p.m. PT): This weekend, 2012 and Pirate Radio will try to do some damage at the box office. While 2012 is obviously going to dominate the frame, Pirate Radio should serve as a nice bit of counterprogramming.

By now, 2012 director Roland Emmerich is a certified expert at destroying the world in movies. With Independence Day, Godzilla and The Day After Tomorrow under hit belt, Emmerich has earned a certain level of trust among mainstream audiences. That trust will go a long way with patrons who are looking for simple escapism that delivers on what it promises.

Sony has given 2012 a very confident marketing push. At the beginning of October, the studio released a two-minute clip in "roadblock" fashion to television viewers across the country and the campaign has only picked up momentum since then. The trailers and promotional spots have wisely played up the real star of the film: stunning special effects.

With The Twilight Saga: New Moon opening on November 20, it's particularly important for 2012 to grab as much cash as it can this weekend. The teen vampire flick is sure to steal the attention of younger audiences who normally would be interested in a second helping of 2012.

"[ 2012 ] has fantastically high want-to-see levels for males under 25," says John Singh, spokesperson for Flixster, when discussing the kind of activity the film site is seeing. "Every audience segment is highly interested in it—with the sole exception, interestingly, of older males. But given the strength in every other group, there should be no difficulty overcoming this, and with activity up more than 100% this week for 2012, it’s looking like it will have an incredibly strong weekend."

As of 4 p.m. PT, MovieTickets.com is reporting that 2012 is responsible for a modest six percent of sales, while on Fandango.com it boasts five percent. New Moon is currently dominating sales on both sites. 2012 's numbers should increase as Friday draws near.

Opening at around 900 locations this weekend, Pirate Radio has been the victim of release date changes and even a name change—it was formerly titled The Boat That Rocked —and those two factors haven't exactly helped its chances of making some decent bank.

Star Philip Seymour Hoffman is certainly a well-respected thesp, but he's far from a reliable box office draw. Pirate Radio will have to rely on adult moviegoers who aren't interested in experiencing the assault on the senses that is 2012. Expect the Focus release to bring in around $4 million during its opening weekend.

As audiences start to catch the holiday spirit, Disney's A Christmas Carol should continue to maintain consistent earnings. Last weekend's headlines about a disappointing debut missed the big picture when it comes to Carol.

"We're in a long-distance race or a marathon, not a 100-yard dash. This is a very calculated way to release a film in order to maximize the holiday potential," says Chuck Viane, President, Walt Disney Studios Motion Picture Distribution.

Look for Carol to grab around $18.5 million during its sophomore frame.

Lionsgate will expand Precious: Based on the Novel "Push" by Sapphire to more than 160 locations this weekend. The stark drama is coming off an incredibly strong debut frame during which it averaged more than $100,000 per location.

The promotional muscle of Oprah and Tyler Perry combined with a healthy amount of Oscar buzz are propelling the indie flick forward during a typically competitive season. The momentum is growing at a rapid pace.

"At this point, overall activity [on Flixster] is actually more in line with a major wide release than a film playing on so few screens, which are likely to be sold out," says Singh.

With its extended reach, Precious could capture another $4 million this weekend as it continues its successful theatrical run.

Fantastic Mr. Fox will open at four locations this weekend. The 20th Century Fox release is guaranteed to post a healthy location average before ultimately expanding to more theaters. It will be interesting to see how well younger patrons will respond to the style of Fox director Wes Anderson.

Check back tomorrow for our Top 10 weekend predictions as well as official location counts.