Lionsgate's Daybreakers will continue the recent trend of vampire-themed films this January. 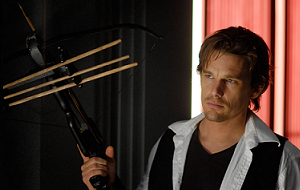 This week, we've added Daybreakers, Leap Year and Youth in Revolt to the Anticipation Index. All three films will be released wide on January 8, 2010.

Lionsgate will try to capitalize on the recent vampire craze with Daybreakers. While stars Ethan Hawke, Willem Dafoe and Sam Neill are far from sure things at the box office, they have all gained at least some trust from mainstream audiences in past projects. Unfortunately for Daybreakers, Cirque du Freak: The Vampire's Assistant recently proved that vampire films are not necessarily guaranteed to be successful.

Leap Year will represent a real test for star Amy Adams. After appearing in the wildly successful Julie & Julia earlier this year her profile has risen considerably. The film could turn into a sleeper hit if mainstream audiences begin to consider Adams as one of the most reliable leading ladies working today.

Youth in Revolt will also represent a test for Michael Cera considering that he's being used the most to market the film. Revolt should have a strong appeal among male audiences who aren't enticed by Daybreakers.