UPDATED: Weekend Actuals: 'The Blind Side'

The continued success of The Blind Side helped push 2009's domestic cume past 2008's record haul. 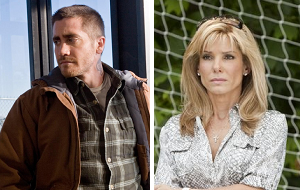 The Blind Side came in slightly below estimates with $20.043 million. Click here for the full report.

With an estimated rake of $20.4 million, The Blind Side was able to easily trump New Moon in order to claim the top spot this weekend. Brothers debuted in third place with a modest $9.7 million. Armored, Everybody's Fine and Transylmania failed to deliver in wide release. Click here for the full report.

Saturday Morning Update (9:54 a.m. PT): As expected, The Blind Side will finish in first place this weekend with around $21.4 million. Brothers has emerged as the strongest performer among the weekend's new wide releases. Click here for the full report.

Thursday Afternoon Update (4:29 p.m. PT): As of 3:30 p.m. PT, MovieTickets.com is reporting that New Moon is responsible for 16 percent of sales, and Blind Side accounts for nine percent. Blind Side will be adding nearly 200 locations this weekend, which will certainly help bolster what is bound to be a #1 finish this weekend.

Check out our final predictions in the table below.

Wednesday Afternoon Update (6:14 p.m.): This weekend, Everybody's Fine, Brothers, Armored and Transylmania will open in wide release. Still, The Blind Side and The Twilight Saga: New Moon will end up dominating the box office for the third weekend in a row.

Blind Side is showing amazing staying power, and it should easily end up in first place during its third weekend in theaters. The Warner Bros. has a real shot at hitting the $200 million domestic plateau during its theatrical run, which will far exceed expectations.

As of 4 p.m. PT, Fandango.com reports that Blind Side is responsible for 17 percent of daily sales, while MovieTickets.com is reporting 11 percent. Those are very healthy numbers considering that online sales tend to be stronger for films that appeal to younger demographics than the ones that Blind Side primarily appeals to.

Blind Side should rake in an additional $23 million this weekend.

While Blind Side strives to reach the $200 million mark, New Moon is on its way to reaching $300 million. The Summit release should finish in second place.

Expect New Moon to grab around $18.5 million this weekend.

Everybody's Fine and Brothers will face off for third place. Both films have their strengths and weaknesses.

Miramax is likely hoping that Everybody's Fine can do as well as About Schmidt did in 2002. The two films definitely have a lot in common since they both focus on an older man who travels across the country to be with his family. Schmidt was propelled by the star power of Jack Nicholson, who played the antithesis of his typically brash and confident characters. Robert De Niro also tones it down considerably in Everybody's Fine and he's backed by a strong supporting cast that includes Drew Barrymore and Kate Beckinsale. Schmidt grossed $65 million, which translates to around $80.5 million when adjusting for inflation. While Everybody's Fine probably won't make quite as much, it will find a niche among the same type of older moviegoers that showed up for Schmidt.

Everybody's Fine could grab as much as $9 million from around 2,200 theaters during its debut frame.

With the presence of Jake Gyllenhaal, Tobey Maguire and Natalie Portman, Brothers boasts one of the most impressive young casts of the entire year. The Lionsgate release will need every ounce of trust those young stars have earned since the film deals with the war in Afghanistan and post-traumatic stress disorder. It also won't help that Brothers bares some resemblance to Stop-Loss, a film that dealt with post-traumatic stress disorder caused by the war in Iraq. The Paramount release landed with a thud last March, grossing only $10.9 million domestically during its theatrical run.

Films that focus on Iraq and Afghanistan are not fairing well at the box office, so the trailers and television spots for Brothers have wisely emphasized the love affair between Gyllenhaal and Portman over Maguire's mentally-unhinged veteran.

Brothers could open with around $8.5 million from 2,000 or locations.

Armored will try to capture the same action-loving crowd that made Taken and Law Abiding Citizen such big hits this year. Yet the Screen Gems release doesn't have as much going for it as those films did. Stars Matt Dillon and Laurence Fishburne are reliable supporting actors, not box office draws. The fact that it's only opening at an estimated 1,900 locations won't help either.

Armored could muster about $6.5 million during its debut.

Transylmania is hoping that audiences are ready to laugh at the recent vampire trend. Full Circle Releasing is sending the spoof out to around 1,005 locations and it will be lucky to make even $1.5 million this weekend.

After receiving a ton of glowing reviews , Up in the Air will begin its theatrical run at 10 locations this weekend. The Paramount release is bound to start off strong as it heads toward a wide release on Christmas Day.