Jennifer Aniston and Gerard Butler will try to turn The Bounty Hunter into a hit this March.

This week, we've added The Bounty Hunter, Season of the Witch and Hot Tub Time Machine to our Anticipation Index. All three films are set to hit theaters on March 19. 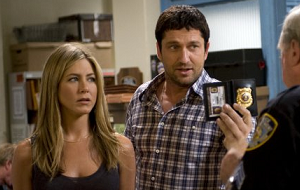 It's obvious that The Bounty Hunter is aiming for the same audience that made Mr. and Mrs. Smith a $430 million worldwide hit in 2005. The film combines key romantic comedy elements with action scenes. If Jennifer Aniston and Gerard Butler prove that they have a palpable chemistry on screen, then the film could end up being a solid hit. Yet it's worth noting that both stars are not exactly sure things. For every Marley and Me, Aniston seems to have a Love Happens. As for Butler, he wasn't able to carry Gamer on his own.

Speaking of not being a sure thing, Nicolas Cage is the main selling point for Season of the Witch. Cage is capable of delivering at the box office (see the National Treasure films), but he's also capable to making huge duds (The Wicker Man). Unless horror enthusiasts really latch on to Witch, it will probably end up in the dud camp.

With a story focused on male bonding and lots of partying, Hot Tub Time Machine seems to be gunning for at least a fraction of The Hangover's audience. The trailer is full of laughs, and the high-concept premise may entice a healthy crowd. Hot Tub Time Machine could end up being a sleeper hit.

Check out our predictions for The Bounty Hunter, Season of the Witch and Hot Tub Time Machine as well as other films in the table below.