Lionsgate's Kick-Ass is going to deliver an unconventional take on the superhero genre this coming April.

This week, we've added Kick-Ass and Death at a Funeral to our Anticipation Index. Both films are set to hit theaters on April 16. 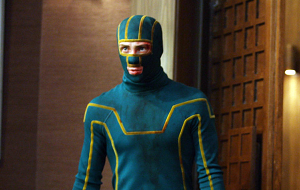 Kick-Ass has "sleeper hit" written all over it. The film's trailer is funny and inventive, and early word of mouth is quite positive. The fact that its source comic was created by Mark Millar, the same man responsible for Wanted, is also a good sign. Wanted grossed nearly $340 million worldwide for Universal, and a sequel is in the works. While Kick-Ass is probably too quirky to post that kind of haul, it should become a mid-level hit this spring.

The teaming of Chris Rock and Martin Lawrence is the best asset that Death at a Funeral has going for it. While the two actors don't boast the same level of drawing power they once did, they should be able to do some damage together. Look for the Sony/Screens Gems release to tally some respectable grosses.

Check out our predictions for Kick-Ass and Death at a Funeral as well as other films in the table below.