The latest superhero sequel will kick off the summer movie season in grand style. 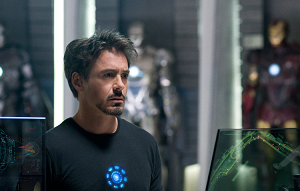 (Thursday, 2:30 p.m. PT): Check out our final top 10 predictions in the table below. A Nightmare on Elm Street is dropping more rapidly than expected.

(Thursday, 1:30 p.m. PT): Flixster is now reporting that Iron Man 2 has passed Alice in Wonderland in pre-release activity on their site. IM2 holds a 12 percent lead over Alice.

(Wednesday, 4:35 p.m. PT): Fandango.com is reporting that Iron Man 2 is outpacing X-Men Origins: Wolverine by more than a 2-1 margin at the same point in the sales cycle. Wolverine launched 2009's summer movie season with an $85 million opening weekend.

(Wednesday, 3:45 p.m. PT): As with most summer blockbusters, the question surrounding Iron Man 2 is not whether or not it will open big, but rather how big. Will the Paramount release topple The Dark Knight's opening weekend record of $158 million or will it simply find a comfortable spot among the top five unadjusted openings of all time? Either way, there's only a very slim chance that Iron Man 2 will be seen as a financial disappointment.

2008's Iron Man was able to kick off the summer in grand style as well with a $102 million opening weekend haul, and the sequel is guaranteed to improve upon that by a healthy sum.

The first Iron Man ended on just the right note needed to propel the property into sequel territory. In the final moments of the film, Tony Stark declared that he was Iron Man, and moviegoers around the country left the theater hooked. As a result, Iron Man showed solid staying power during a competitive summer, and it ended its domestic run with $318 million.

Paramount is utilizing an aggressive marketing blitz for the sequel, led by a fun, action-packed and energetic trailer that has received more than its share of exposure in movie theaters and on television. The confidence that the studio has in this picture comes through loud and clear in the promotional materials.

As of 2 p.m. PT, MovieTickets.com is reporting that Iron Man 2 is responsible for 84 percent of daily sales.

Online activity is strong for the film, but nothing earth shattering.

"In a nutshell, Iron Man 2 hasn't broken any records," says Flixster spokesperson John Singh when discussing activity on the popular website. "Its pace has eased a bit right before opening. Typically, we see an increase in activity just before a movie opens, but Iron Man 2 actually declined a bit from Monday to Tuesday. Does that mean it won't be huge? No-it will definitely be huge."

Expect Iron Man 2 to grab a whopping $153 million from 4,000 locations during its debut frame.

After finishing in first place last weekend, A Nightmare on Elm Street will suffer a significant blow to its audience. Horror films tend to be front-loaded as it is, and competing with a summer blockbuster will not help.

As of 2 p.m. PT, MovieTickets.com is reporting that Nightmare accounts for only one percent of daily sales.

Look for A Nightmare on Elm Street to rake in $10.2 million during its sophomore frame.

Focus will be releasing an interesting alternative to Iron Man 2 in the form of Babies, a documentary that focuses on infants across the globe. The doc is sure to skew heavily female, which should help it find a niche behind Iron Man 2's shadow.

Babies should be able to muster $1.8 million from 510 locations.

Check out our full top 10 predictions in the table below.