Vampires, werewolves and kids with magical powers will try to entertain audiences over the Independence Day weekend 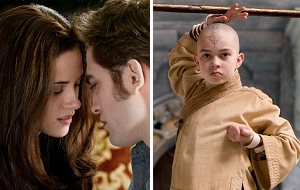 Tuesday Afternoon Update: Strong online buzz, a prime release date and a property that shows no signs of slowing down are the main reasons that Summit can expect The Twilight Saga: Eclipse to dominate Paramount's The Last Airbender over what's shaping up to be a busy couple of days for movie theaters.

Eclipse certainly has some big shoes to fill. New Moon totally shattered expectations when it opened in November 2009 by setting records for the best November opening ($142.3 million), the best opening day ($72.7 million) and the best midnight gross ($26.3 million). That was particularly impressive considering that 2008's Twilight fell just shy of $70 million during its debut. While Eclipse won't show as much growth as New Moon did, it's bound to add more than its share of fans to the already wildly popular franchise.

According to the most recent data from BOXOFFICE's WebWatch, Eclipse boasts a staggering 51.66 percent market share of Internet opinions among unreleased films. The next closest movie is Harry Potter and the Deathly Hollows: Part I, which is benefiting from the release of its new trailer.

Facebook activity is off the charts as well. At the rate it's going, the most active Twilight page will hit 7 million fans on its opening day. As for Twitter, Eclipse is set to shatter a tweet record set by New Moon.

Fandango.com is reporting that Eclipse is responsible for slightly more than 90 percent of daily sales.

We're predicting an opening day tally of $73.5 million, followed by $24 million on Thursday and another $84 million from Friday-Sunday, which will give Eclipse a five-day debut of $181.5 million.

Even with all the fuss surrounding Eclipse, there should still be room for The Last Airbender to find its audience. The latest effort from director M. Night Shyamalan will have a huge appeal among teenage boys who wouldn't be caught dead in a theater showing Eclipse. Airbender also comes with a built-in audience thanks to the popularity of the Nickelodeon show. Plus, the added price that comes from 3D tickets can't hurt.

According to WebWatch, Airbender ranks behind Eclipse and HP7 with an 8.47 percent market share of online opinions. That's not a bad showing at all considering how much attention the Deathly Hallows trailer has been receiving.

Facebook growth has been steady but unspectacular for Airbender, and its presence on Twitter has been outpacing Prince of Persia.

Look for The Last Airbender to rake in a respectable $48 million from Thursday-Sunday, $10 million of which should come on Thursday.

Check out our top 10 predictions for Friday-Sunday in the table below.