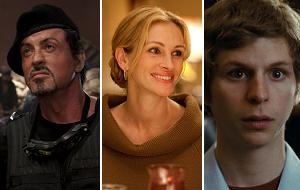 This weekend, we've added Eat Pray Love, The Expendables and Scott Pilgrim vs. the World to our Long Range Forecast. All three films are set to hit theaters on August 13.

After stumbling recently with Duplicity, Julia Roberts looks to have a hit on her hands with Eat Pray Love. Based on a wildly popular novel, the film should bring in the same type of audience that went for Julie & Julia last August.

The rush of ‘80s nostalgia continues with The Expendables, a film that obviously owes a lot to the type of action extravaganza that was so popular during that decade. Sylvester Stallone has assembled a cast that is every action fan's dream come true from Jason Statham and Jet Li to Bruce Willis, Arnold Schwarzenegger and Dolph Lundgren. Stallone has used his Rocky and Rambo properties to really invigorate his career, and now he may help give birth to a new franchise. Expect this one to be a big, fun, brainless action extravaganza.

Scott Pilgrim already has a loyal following thanks to its source material. The real test for the Michael Cera vehicle will be whether or not it can reach an audience beyond the "fanboy" demographic. If the romance angle appeals to females audiences, then Universal could have a break-out hit on their hands.