Early Weekend Predictions: 'Machete,' 'The American' and 'Going the Distance' 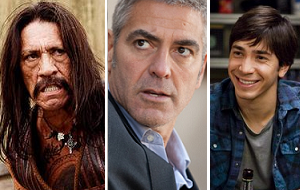 Even though Danny Trejo isn't as big of a star as George Clooney and Drew Barrymore, it looks like the grizzled character actor will walk away with a #1 debut over Labor Day weekend.

Machete is certainly in the same vein as The Expendables. It's an action film that revels in camp, extreme violence and a lack of pretension. Just like Expendables, Machete boasts a stellar cast. Jessica Alba, Robert De Niro, Steven Seagal, Michelle Rodriquez and Lindsay Lohan all lend support to Trejo. It also doesn't hurt that Robert Rodriquez has earned a reputation as a director who know how to churn out fun action flicks.

According to the most recent WebWatch report, Machete boasts a 12.73% percent share of online opinions among unreleased films. Only Harry Potter and the Death Hallows: Part I ranks ahead of it. 20th Century Fox has done an excellent job promoting the film online ever since they debuted the first trailer on Cinco de Mayo.

Machete's activity on Facebook leaves something to be desired. The most active page devoted to the film has yet to reach 15,000 fans. To put that into perspective, Jonah Hex was just shy of 15,000 fans on the day of its release.

Luckily, Twitter activity for Machete is much stronger than Facebook activity. The action flick is inspiring a comparable number of tweets to Ninja Assassin.

As of 3 p.m. PT, Machete has yet to break into this week's top five sellers list on Fandango.com.

Look for Machete to rake in $15.5 million from around 2,500 locations over the four-day holiday frame.

George Clooney's drawing power will only take The American so far. The Focus release is a slow, meditative look at the life of a hitman. Moviegoers who love Clooney for his charm won't find much of it in The American. Also, Clooney's latest is simply not generating the kind of enthusiastic critical support that is needed for moviegoers to take a chance on something dark and brooding.

Focus was able to build The American's Facebook page up to nearly 60,000 fans but it has been growing at a snail's pace this week. The days leading up to a film's release is often when the fastest growth happens on Facebook, so word must be getting out that the film isn't exactly a shot of adrenaline.

Twitter activity has been modest all week for The American. The film is pacing far behind Salt and Robin Hood, but it is generating more tweets than Green Zone.

As of 3 p.m. PT, Fandango reports that The American is responsible for 11% of weekly sales.

Look for The American to grab $14.5 million from 2,721 locations from now until Labor Day.

Going the Distance seems doomed to become a romantic comedy that will quickly be pushed out of theaters. While stars Drew Barrymore and Justin Long may work as a couple in real life, they won't deliver blockbuster numbers as a theatrical pairing.

On Facebook, Going the Distance's most active page hasn't hit 10,000 fans yet. Even The Switch had 40,000 fans by the Wednesday before its release.

Twitter activity for the rom-com isn't any better. Going the Distance is generating less tweets than the likes of She's Out of My League, Leap Year and When In Rome.

Going the Distance should end up with an underwhelming $11 million from 3,030 locations during the holiday weekend.

Check out our top 10 predictions for the four-day weekend in the table below.