Weekend Predictions: 'Harry Potter and the Deathly Hallows: Part I' and 'The Next Three Days' 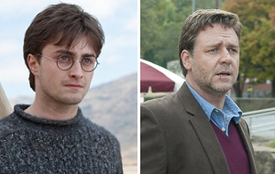 The end of the Harry Potter franchise is upon us and fans of the series will be filling up movie theaters this weekend to enjoy the saga while it lasts. Grosses will be very healthy, and the Warner Bros. release has a very real shot at topping 2010's best opening: Iron Man 2's $128.1 million haul.

2005's Harry Potter and the Goblet of Fire still represents the franchise's best opening weekend with $102.7 million, but that's only because it was the last film in the series to open on a Friday. There's no question that 2009's Harry Potter and the Half-Blood Prince would have shattered that record if it was released on a Friday since it brought in a staggering $158 million in five days. With Potter frenzy at an all-time high, it's hard to imagine that most fans will wait until Monday to see it for the first time. As a result, a large Friday gross (including midnight shows at a record 3,700 locations) is likely, followed by steady business all weekend.

According to Boxoffice.com's most recent WebWatch report, Deathly Hallows: Part I boasts a dominant 55.39% share of online opinions. That's incredibly impressive considering that TRON: Legacy and Battle: Los Angeles are both generating a lot of attention.

The most active Potter page on Facebook has been showing some serious growth. Despite already having a base of nearly 8 million, the page has been tacking on more than 200,000 new supporters a day this week. That's a very strong sign that the franchise is picking up new fans who don't want to miss out on all the hysteria.

On Twitter, Potter is easily outpacing Alice in Wonderland and Percy Jackson and the Olympians: The Lightning Thief.

Fandango.com is reporting more than 2,200 sold-out shows, while MovieTickets.com has tallied over 1,900.

Look for Harry Potter and the Deathly Hallows: Part I to rake in a staggering $129 million from 4,125 locations during its debut frame.

Opening in Potter's shadow, The Next Three Days will have a tough time making its mark this weekend. Still, the adult-skewing action flick should be able to hold steady in the coming weeks after the Potter craziness dies down a bit.

The film's most active page has a healthy following of more than 28,000 fans. That actually tops the amount of fans that The Town and Unstoppable had on the Wednesday before hitting theaters.

Twitter activity for The Next Three Days is relatively weak. The Lionsgate release is not inspiring nearly as many tweets as Unstoppable, The Town and Law Abiding Citizen.

It comes as no surprise that The Next Three Days has yet to establish a presence on Fandango considering that Potter is so dominant.

The Next Three Days should manage $9.5 million from 2,654 locations this weekend.

Tags: Harry Potter and the Deathly Hallows: Part 1, The Next Three Days