Weekend Predictions: 'TRON: Legacy,' 'Yogi Bear' and 'How Do You Know' 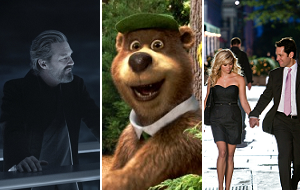 TRON: Legacy will have no problem beating fellow newcomers Yogi Bear and How Do You Know in order to claim the top spot at the box office this coming weekend.

Coming off the success of Tangled, Disney's TRON: Legacy will mainly appeal to a totally different demographic: 18-34 males. Even though the sci-fi flick is rated PG, it's not likely to send families rushing to theaters. The trailers for the film are certainly more dark and brooding than your typical Disney flicks, which means that most parents will view TRON: Legacy as something that younger children won't be amused by.

According to Boxoffice.com's most recent WebWatch report for unreleased films, TRON: Legacy holds a healthy 18.85% market share of online opinions. It's second only to Transformers: Dark of the Moon.

As of 2 p.m. PT, Fandango.com is reporting that TRON: Legacy is responsible for a very strong 51% of daily sales, which puts it far ahead of all other films.

Look for TRON: Legacy to rake in $44 million from about 3,300 locations during its debut frame.

Yogi Bear represents a much more appropriate choice for families with young children than TRON: Legacy. Forget that critics are completely trashing the film. Huge brand recognition will make the Warner Bros. release an easy, comfortable choice for parents looking to get their children out of the house. Even though word-of-mouth is bound to be lukewarm at best, Yogi Bear should also hold up well during the rest of the holiday season.

Yogi Bear has actually had a strong week on Twitter. On Tuesday, it managed to pull in more than 5,000 tweets. As for Facebook, the animated flick's following of more than 24,000 supporters pales in comparison to the likes of Despicable Me, which had 135,000+ supporters on the Wednesday before hitting theaters.

Fandango.com is reporting that Yogi Bear has yet to break into the top five sellers list as of 2 p.m. PT. That should change on Thursday as more families plan for the weekend.

Expect Yogi Bear to start its theatrical run with $19 million from around 3,400 locations.

Despite boasting an incredible cast and an established writer/director at the helm, How Do You Know just isn't catching on. Reactions to the film's theatrical trailer were far from enthusiastic, and the Sony/Columbia release wasn't able to rebound. Critics are not being kind, and that truly matters for a film that will appeal to older, more discriminating audiences.

According to WebWatch, How Do You Know holds only a .80% market share of online opinions. That puts it behind the likes of True Grit, Gulliver's Travels and Rabbit Hole. Not a good sign.

Facebook activity isn't promising either. How Do You Know's fan count of more than 60,000 looks weak compared to Eat Pray Love's 660,000 fans on the Wednesday before release. On Twitter, How Do You Know trails It's Complicated.

How Do You Know should managed $10 million from around 2,500 locations during is opening frame.

The Fighter and Black Swan are expanding this weekend, and both Oscar contenders will do some serious damage at the box office. The Fighter is set to reach 2,200 locations, while Black Swan is slated for 900.

Tags: TRON: Legacy, Yogi Bear, How Do You Know, The Fighter, Black Swan