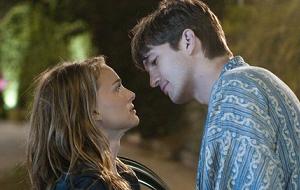 No Strings Attached has the distinct advantage of being the only major wide release this weekend. A #1 opening is in the cards.

The pairing of Ashton Kutcher and Natalie Portman is bound to earn plenty of trust from moviegoers looking for a comfortable date night option. Paramount has given the romantic comedy an aggressive marketing blitz, led by trailer that isn't nearly as annoying as what is afforded to other films in the genre. Plus, the red-band version showed that director Ivan Reitman's latest effort has a raunchy comedic edge to it, and that may cause less moaning from male moviegoers.

According to the most recent WebWatch report for unreleased films, No Strings Attached holds a 4.29% market share of online opinions. While not exactly a strong number, that's not cause for concern. Star-driven comedies such as It's Complicated and Couples Retreat failed to generate serious online buzz and still did quite well.

No Strings Attached's most active Facebook page has a respectable following of more than 91,000 fans. After getting off to a slow start in the beginning of the week, the page is beginning to add more fans at a rapid rate. On Twitter, No Strings Attached is easily outpacing the likes of Killers and Leap Year.

As of 5 p.m. PT, Fandango.com is reporting that No Strings Attached is responsible for 6% of daily sales. That's a solid figure, and it's sure to increase on Thursday as more couples plan for the weekend.

Look for No Strings Attached to rake in $22.5 million from around 2,800 location during its debut frame.

After an impressive debut last weekend, The Green Hornet will slide to second place during its sophomore frame. Word-of-mouth isn't overwhelmingly positive, but it's strong enough to maintain a solid theatrical run. The Seth Rogen vehicle remains firmly in first place when it comes to tweets for released and unreleased films alike. On Facebook, The Green Hornet has added more than 23,000 new supporters to its most active since Friday morning. While not a blockbuster-level increase, that still represents healthy growth. The Green Hornet currently has a modest 64% approval rating on Flixster from more than 51,000 user reviews.

Fandango is reporting that The Green Hornet boasts 10% of daily sales as of 5 p.m. PT.

Expect The Green Hornet to tack on another $17.5 million this coming weekend.

The Dilemma is poised to fall off a cliff at the box office. Audiences are simply not responding to director Ron Howard's comedy about infidelity and keeping secrets. The Universal release currently ranks behind Season of the Witch on Twitter. On Facebook, The Dilemma has only added around 5,500 new supporters since last Friday. Nearly 17,000 Flixster users have combined to give the film a toxic 48% approval rating.

The Dilemma should bring in an underwhelming $7.5 million during its sophomore frame.

Opening at around 650 locations, The Way Back should muster about $2 million. Oscar buzz certainly would have helped the latest from acclaimed director Peter Weir, but the Newmarket release was overshadowed by more showy contenders.

Tags: No Strings Attached, The Green Hornet, The Dilemma