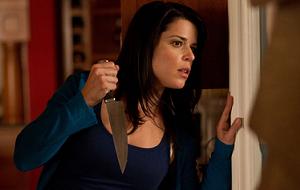 This week, we've added two new films to the Long Range Forecast. Scream 4 and Rio are both set to open on April 15.

After stumbling late last year with My Soul to Take, director Wes Craven is bound to have a triumphant return thanks to his successful Scream franchise. Early reactions to the film's trailers are quite positive and the horror flick should do well among males and females 18-34. Stars Emma Roberts and Hayden Panettiere will help bring in younger crowds who weren't old enough to enjoy the first three films in theaters.

Expectations are going to be high for Rio. Director Carlos Saldanha is responsible for the incredibly lucrative Ice Age series, and 20th Century Fox is no doubt hoping that Rio will launch another. The voice cast features Anne Hathaway, Jesse Eisenberg and Jamie Foxx. That's a strong ensemble, but it won't provide the same kind of boost that Rango will see thanks to Johnny Depp.