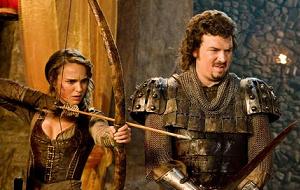 This week, we've added four new films to the Long Range Forecast. Your Highness, Arthur, Hanna and Soul Surfer are all set to open on April 8.

Your Highness boasts one of the most impressive young casts of the year. Danny McBride, James Franco, Natalie Portman and Zooey Deschanel are all at the top of their respective games, and they'll guarantee at least a respectable opening. Unfortunately, Your Highness has too much in common with two recent comedic duds: Land of the Lost and Gulliver's Travels. Both of those films took stars out of their comfort zone in the same way that Your Highness transports its cast into a fantasy setting that is far from what they're used to.

Russell Brand will try to carry Arthur on his shoulders. The comedy will show whether or not the British comedian will have a future as a leading man. We're betting that he's better off sticking to scene-stealing supporting turns.

Hanna and Soul Surfer are shaping up to be two of the spring's biggest duds. Hanna just looks too bizarre for mainstream audiences to digest, while Soul Surfer has two leading stars—Dennis Quaid and Helen Hunt—that are both past their prime in terms of drawing power.