Weekend Predictions: 'The Roommate' and 'Sanctum' 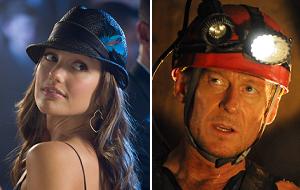 The Roommate will serve as a nice bit of counter-programming during Super Bowl weekend, and it's sure to debut in first place. Meanwhile, Sanctum will have to grab all the cash it can before its male viewers all but disappear on Sunday.

Screen Gems is clearly hoping that The Roommate will deliver at the box office in the same way that their female-skewing thriller Obsessed did in 2009. Obsessed managed a $28.4 million opening before finishing its domestic run at $68.3 million. The Roommate is bound to fall short of that mark, but chances are it will capture a healthy percentage of Obsessed's audience.

According to the most recent WebWatch report, The Roommate boasts a 5.61% market share of online opinions among unreleased films. That would be a weak number most of the time, but Justin Bieber: Never Say Never currently holds a dominant 51.11% share. With that in mind, The Roommate is performing quite well.

On Twitter, The Roommate is inspiring a healthy amount of tweets and it's headed for a reassuring weekly total of 10,000. Facebook activity is also promising for the thriller. The Roommate's most active page has added nearly 14,000 new supporters since Monday morning. Most #1 films add at least 2,000 new fans a day during the week of their release, so The Roommate is well ahead of the normal pace.

As of 4 p.m. PT, Fandango.com is reporting that The Roommate is responsible for 4% of daily sales. Again, the thriller is being overshadowed by Never Say Never's 61%.

Look for The Roommate to grab $17 million from around 2,400 locations during its debut frame.

Even though he only produced the film, James Cameron is giving Sanctum a much needed boost. Stars Ioan Gruffudd and Richard Roxburgh are recognizable character actors, but they are far from reliable box office draws. Universal has wisely played up Cameron's name to the point that some moviegoers may even be tricked into thinking he directed it.

According to WebWatch, Sanctum boasts a 2.96% market share of online opinions. That puts it behind only Justin Bieber: Never Say Never, The Roommate and Transformers: Dark of the Moon.

Twitter activity for Sanctum picked up a bit on Tuesday, but it's still pacing behind the likes of Daybreakers and Devil. On Facebook, Santcum's most active page has built a following of only around 32,000. That's a disappointing number for a film aimed mostly at males 18-34.

Fandango is reporting that Sanctum is responsible for 4% of daily sales. That number could increase slightly on Thursday as more moviegoers plan for the weekend.

Sanctum should manage $11 million from around 2,700 locations during its opening.